The Once Loyal Shopper

- March 05, 2019
I didn't think of myself as a loyal shopper. I mean I have loyalty cards for at least a dozen different shops, I tend to go where the bargains are for the products that I buy that are branded items and I'm just as at home in Asda, as I am in Sainsbury's, Morrisons, M&S, or the shop I spent most of my cash in; Tesco. 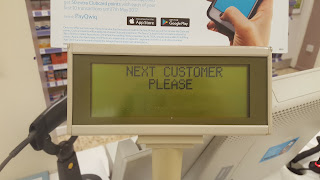 The reasons for why Tesco was where I did my main shop each week were two-fold and super simple.

It was a one-stop shop, I could get everything I needed in the store, including Gluten Free items.

Whenever I used MySupermarket to compare my basket price it was Tesco that came up cheaper.

Cheap + Everything = A Happy Shopper/Pippa.


One evening, in late January,  Flyfour and I had popped out to Aldi to have a nose and a bit of alone time together, as I had seen a friend post some bits she had picked up in store that day including some Gluten Free items that were not the usual Gluten Free items. If you live with a restricted diet then you will know how great this is, I mean a lot of the meals we prepare at home are made from scratch, but sometimes you want that easier option!

Sausages, Fish Goujons, Falafel, Cereal Bars, Bread, Sweets, Crisps... actually the crisps were all gluten free it was just these ones looked nice and were half the price they were selling in Tesco, which I knew as I'd seen them when I'd been in the store earlier picking up some groceries with my Mum.

It was at this point that Flyfour suggested that for our month of Salad, we should also change Supermarket and swap to Aldi for the month too. A double challenge. And I said yes.

And so I started shopping at Aldi for February.

The first week, Flyfour and I went together and as we stood there with our filled trolley we tried to guess how much the shopping would come to. 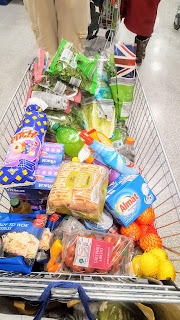 We guessed wrong, we guessed too high, although I WAS CLOSER WITHOUT GOING OVER, so I totally won okay Flyfour?!

After we had put the shopping away, I put everything we had purchased into my Supermarket (or the nearest equivalent product, as in what I would have purchased instead) and found that we had paid £15 less than the next cheapest Supermarket.

I did that price comparison every week and each week it came out less (Tesco the first, third and fourth week, Asda the second week) and each week I was surprised by what the shopping total had been and each week Flyfour and I found out we were rubbish at guessing how much it was going to be. Also, don't play the game with Flyfour, he cheats and pretends your answer was his answer.

And now the month of Salad is over... but I'm not going back to Tesco as my weekly supermarket. Nope, I'm hanging out at Aldi for the foreseeable future.
Family Life Food Money