The Boy In The Dress

- March 19, 2019
Dan Jon Jr had had a plan for years, for his final World Book Day at Lower School. Dan Jon wanted to be Dennis, the main character in The Boy in the Dress and he wanted to wear a dress to School. Then the announcement came out, it was hats that the children were being encouraged to wear and so Dan Jon and I checked with the Deputy Head that he could still wear a dress... and then I checked with Dan Jon, that he understood what it meant, wearing a dress to School when hardly any of the other students would be wearing a costume.

Let me be clear, I wasn't talking him out of this, I wasn't trying to get him to change his mind. I was just checking that he was prepared for wearing a dress to School.

And he schooled me.

Plus Mum, what if someone at School feels lonely or left out because they are different? If they see me being different then they'll know it's okay, because if I can, they can!

So Dan Jon went to School in a dress. 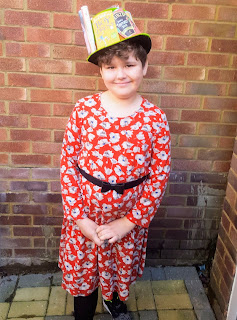 The entire day was a great day for him. Apart from he realised that girls clothing don't typically have pockets and you could hear him lamenting over this all the way to School;

"How on earth are girls supposed to carry their stuff?!"

Dan Jon had a great day, other than having no pockets, finding girls clothes to be super thin and being tortured by wearing a pair of tights (as it was cold and he figured that would be better than bare legs) which were super tricky to get on again after PE.

As predicted, he was one of only around ten people in the entire School who was not wearing School Uniform (with his friends mostly just deciding to wear hats) and his friends didn't really mention that he was wearing a dress and even his teachers just passed comments like "Nice Dan Jon!" although there was one friend did a double take at the gate, because he thought that Dan Jon was his sister, who had left the School four years before!
Family Life Reading World Book Day