- March 26, 2019
Over the last few weeks, I've had a bit of an earworm issue. I have often found myself humming the chorus to a song, or sitting down at the Piano at Church and playing a few chords (badly) whilst trying to sing along.

And it is all Top Ender's fault. 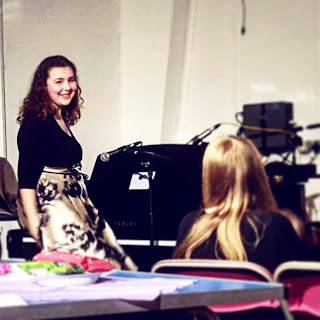 Top Ender had planned to sing at the Spring Concert, it was just that she didn't have anything that she wanted to sing. Yes, she could sing the pieces she'll be performing for her Grade Exam in a couple of weeks, she could sing various songs from most of the musicals that we are almost constantly singing at home (there are a few that wouldn't make it past the School censorship!) but none of these made Top Ender feel that they were the one.

And then in English, Top Ender was inspired and jotted down a few words and a chord pattern. She played around with it, a friend helped her a bit, she rejigged the lyrics and had something she was reasonably happy with.

So she performed it to the Music Department, to get permission to perform it at the Concert. As her friend hadn't been at the session, Tops accompanied herself and it was here that the suggestion that Top Ender accompany herself, rather than her friend, came about.

Top Ender went to School early every morning to work on learning how to sing and play the song she had written. We don't have a piano at home, but she knew that she had to practice so she went before School, she went to the music block during the midmorning break and during lunch, she stayed late after School and even went to Church early so she could use the piano there!

Eventually, she was ready to perform. Heck, I think even I could perform it I had heard it that often and been shown how to play it so much!

This isn't the audio from the Concert, but from one of her last practices.


Top Ender was FANTASTIC and the grin she had after finishing was so sincere and full of love that my heart did the same as the Grinch's and grew at least three sizes (and it was huge to start with!) with pride.

I think the bit that made me grin the most, was when one of Top Ender's music teachers came to speak to me whilst Top Ender was putting her Cello safely away (she'd played in the Orchestra too) and said that she had seen me singing along with Top Ender, but that I might not have noticed that several of the students who hang out in the music block had been singing it too and that Tops had been requested to teach it to a few students who, like me, hadn't been able to get it out of their heads!

I doubt this will be the last time we hear a song written by Tops!
Exams Family Life life skills Music