Top Ender Giggles - Its a bloke wearing a Dress! 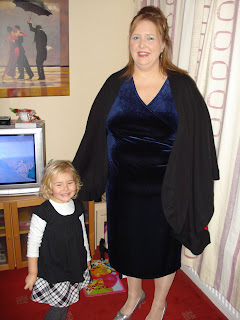 Last week Top Ender was sitting in the back of the car as we drove past a local Adult Nightclub (Its the local Lesbian, Gay & Transgender Venue, don't you know). Normally when we go past this club the car park is empty and I have only once seen something (well someone) in the car park that made me double check what I had just seen as it was gone Midnight and I wasn't sure if I should believe my own tired eyes!

As we drove past I noticed in the car park a gentleman standing next to his car. The gentleman wasn't wearing the usual type of clothing that a gentleman would. He was however wearing a very nice black and purple Lycra dress and patent black high heels.

There were some giggles from the back of the car as Top Ender spotted him.

"Whats funny Top Ender?" asked Daddy
"There was a man wearing a purple and black dress!" giggled Top Ender
"How do you know it was a man?" asked Daddy
"It was very obviously a man!" I snorted
"He might of been going to a fancy dress party" said Daddy
"No he wasn't wearing a wig, it was just a man wearing a dress!" answered Top Ender
Edit: Obviously the picture isn't a bloke in a dress, its me when I was pregnant with Baby Boy going out to a Christmas dinner....
Funny