- February 19, 2011
Top Ender and Baby Boy have had a bit of a thing about Freshly Squeezed Orange Juice at the moment. I think that it started because of Agent Oso getting a digimedal for helping two kids make some freshly squeezed Orange Juice for their Mom, but I have no idea why it has grown into something that they would continually ask about! Daddy and I decided that buying some large oranges and a Spritta Citrus Squeezer from Ikea might show them that freshly squeezed Orange juice every morning isn't as simple as it sounds. 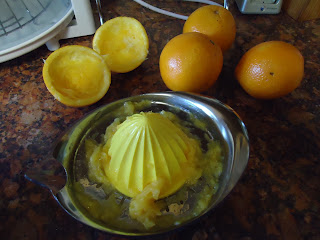 We were wrong. They loved it.

Baby Boy went first and after I had sliced the first orange juice in half he squeezed as much juice out of the orange as he could manage, which surprisingly was a lot! 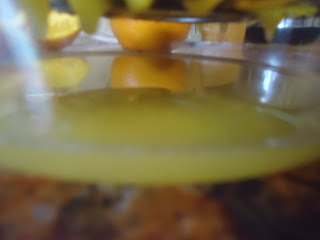 The first sip of orange juice was deemed as Orangey tasting by Baby Boy and he carefully carried his cup through to the Living Room where he sat sipping his orange juice from his new BabyBjorn cup (review and competition coming soon!) quite contentedly. 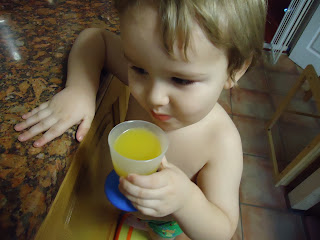 Meanwhile Top Ender and I were squeezing some more juice for Top Ender to drink. She quickly realised that squeezing the juice like this resulted in Orange Juice with bits in... something which she isn't too keen on! 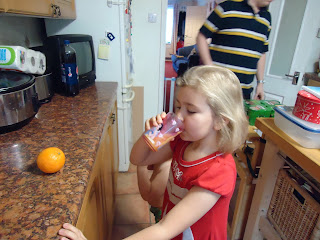 Top Ender and Baby Boy both loved their freshly squeezed orange juice, but I don't think it is something that they are going to be doing every morning!
Drinks Family Life