- February 07, 2011
We adore watching Studio Ghibli films and as you can see from last weeks mention of film themed days for the Half Term Holiday, we like to make watching the films a little more special, by theming our snacks and meals too. The first time that Top Ender and Baby Boy watched Ponyo they were enthralled as the film is so magical and so we knew that we had to buy it for them to watch again and again.There is a scene in the film where, Lisa (who is Sosuke's mother) makes Ponyo and Sosuke a meal. The meal is noodles, egg, ham and slices of spring onion and Baby Boy and Top Ender love to eat then when they are watching Ponyo too! 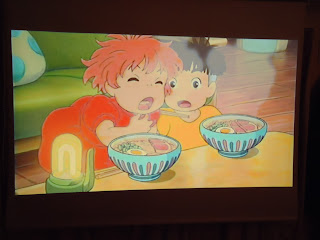 Last week we decided to have a film evening and so after Daddy got home from work we put on the projector and watched Ponyo together whilst I put together the Ponyo meal for us all. As Daddy is unable to eat instant noodles, we has spaghetti instead and I forgot to take a photo of the spring onions on our plates! 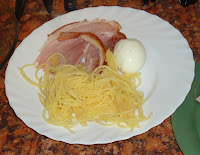 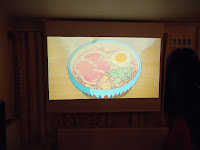 Baby Boy is going through a phase of not eating meat, (it's something about the texture apparently, I remember Top Ender went through the same phase) but when we eat a meal based on a film, he can't help himself and will eat all the food on his plate. It's a nice bonus to the already brilliant evening!
Family Life Review