Too much Simpsons - Baby Boy Giggles

- February 11, 2011
"Top Ender do you want to practice your Violin before School?" I asked
"Okay!" answered Top Ender

It was the first time that Daddy has really heard Top Ender play with the bow, the last time it had just been random plucking of the strings and so he stayed in the living room listening to Top Ender playing the Hoe Down. Baby Boy was sitting on the sofa listening patiently. After Top Ender had finished her piece of music, she started to put the violin away. Baby Boy started to get upset as he was sure that this time, having sat some quietly whilst Top Ender played, having not fussed that he too would get a go on Top Ender's Violin. 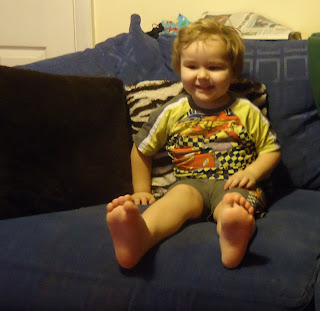 His bottom lip started to wobble, his eyes filled with tears and he shouted;

I know I have said it before, but we really need to stop watching The Simpsons!
Funny