- March 10, 2011
Top Ender knew the date that Mattel's Barbie A Fairy Secret was coming out as she had marked it on her calender and was saving her pocket money to buy it. Since having purchased the DVD, Top Ender has watched the film several times and even I have managed to watch it twice! Barbie A Fairy secret is the sequel to Barbie A Fashion Fairytale, in which it was revealed to us that Barbie is a teen actress who stars in various films that Top Ender loves. 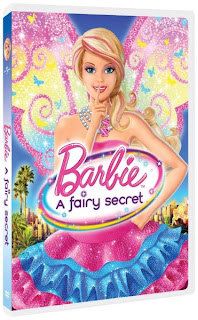 The film carries on in the same vein as Barbie A Fashion Fairytale, in that Barbie is a real girl living in our world. The story line centres around Barbie and Raquelle having to work together to rescue Ken, after he is kidnapped and taken to the Fairy Realm by a besotted Fairy Princess who is determined to make him her husband and stay in the Fairy World forever. Of course nothing is quite what it seems and Barbie finds that people she already knows are actually Fairies and together they set about rescuing Ken and finding out that there are two sides to every story.

The tension from the mild peril that Ken finds himself in, is broken by some truly comic moments with Ken. It seems that Ken sometimes engages his mouth before his brains, and as a result comes out with some truly fantastic one liners. Luckily he seems to realise this flaw in his character so he isn't as fatuous as it might seem at first. 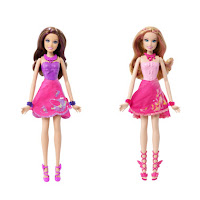 As with all Barbie films there is a range of dolls to go with the film and Top Ender has her eye on them all. I know I have said before, but the dolls really are a good buy as little ones can act out not only things that they have seen in the film, but further scenes from their own imagination and anything that they feel like; Top Ender is quite often found playing teacher to her Barbie and Ken dolls!
Film Review