At our local Shopping Centre there is a restaurant that when it first opened caused a lot of amusement between Top Ender, Daddy and I. You see we had never heard of this chain of restaurants before and so when we saw a "Giraffe" restaurant sign,  we weren't sure if it was for giraffe residents of the local area to be served giraffe cuisine (a bowl of juicy leaves for you Madam, a bowl of twigs and thorns for you Sir and a plate of acacia ants for the little one) or if the giraffe's of the local area were going to be our dinner...

We decided we would go one day to find out, but we are ashamed to say that we still haven't been. Partly because the restaurant is always busy and partly because we don't want to know what a giraffe burger tastes like. My sister has been with her family numerous times, and loves the place. She is always telling me that I should go and try some of the food as the restaurant is great from the family and I keep finding excuses. Then I was asked if I would like to try the giraffe family cookbook and I thought what a great way to introduce my family to the types of dishes that they can order at giraffe. 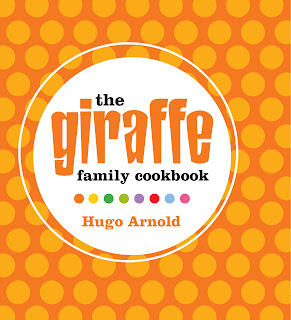 As you can see the book is a brilliant orange and and the recipes inside are all things that I could find on the giraffe menu. As we have given up eating out for Lent I called my sister and asked her what dish I should make for Daddy and I to share as part of our date night. Without hesitation she said Edamame, a quick look in the Giraffe cookbook showed it was in there, unfortunately not one of my seven local supermarkets had Edamame beans in stock.

Remembering a conversation I had with Daddy in the supermarket a couple of weeks ago I decided to make the Prawn Cocktail with Chipotle Spiced Sauce and Tortilla Chips. I served the Prawn Cocktail before a selection of finger foods that we could pick at whilst watching our movie and I forgot to take a photo...

Anyway the modern twist on the traditional prawn cocktail was much appreciated and was very lovely. The cookbook has been lent to my sister so that she can make Edamame beans at home just like she orders when she goes to Giraffe and I am still planning on going to eat in the restaurant... one day after Lent has ended!


The Giraffe Family Cookbook is Published by Weidenfeld & Nicolson and has an RRP £14.99. It is by Hugo Arnold with a foreword by Giraffe Founder, Russel Joffe.
Cook Book