A Home Made Marble Chance Game

- March 30, 2011
When Daddy and I got married we decided to do some of the things that we used to love doing, but had soon grown out of... like playing Marbles. It was great being able to share childhood games with each other and one of the great things about having children is that we can teach them all the games that we played as a child... like Marbles! The other morning Daddy had gotten up with Baby Boy and Top Ender (to give me a needed extra hour or two of sleep) and after they had played and then eaten breakfast and done the dishes it was still too early to wake me up. So Daddy looked around and decided to make use of the various craft items that live in the living room, waiting to be used. So what does a grown man of 30-something do when faced with various cardboard tubes, a shoe box and some sticky tape? He makes a Blue Peter inspired Marble Chance game of course! 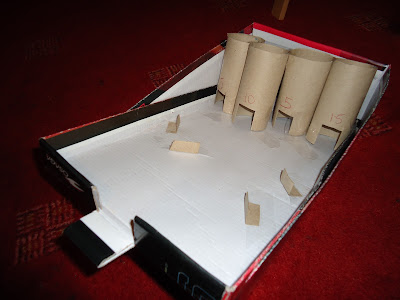 Remembering a game he had made many years earlier, from an already ancient Blue Peter Manual he channelled all his creativity into cutting flaps out of tubes, and making them into some form of bumper and arranged the tubes at one end of the lid of a shoe box. Everything in true Blue Peter style was stuck down with lots of sticky tape! 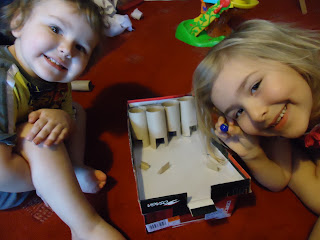 Once it was made the lid was placed in to the shoe box at an angle, so that the top was gently sloped which would help the Marbles reach their destination... one of the toilet rolls! Top Ender and Baby Boy loved this new toy, it was something that was new and exciting and they had help make and they tried their best to get the marbles down the ramp. 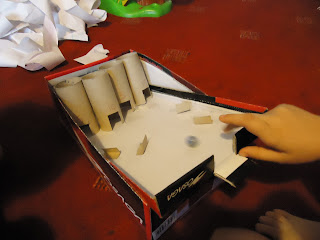 Someone hadn't explained to Baby Boy though that successful completion of the game wasn't just getting the marbles into the toilet tubes, but actually getting the highest score. His exuberance at what he saw as everyone winning however was contagious and soon Top Ender and Daddy were cheering along with Baby Boy's cheer of "You're a Winner!" every time someone rolled a marble. 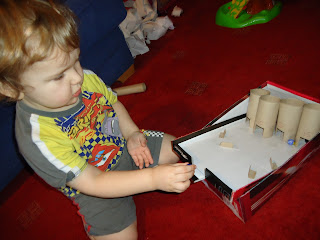 The only downside to all this fun, was that the family decided to come and show me the game... and woke me up!
Craft Family Life