- March 06, 2011
What do you do when you have decided that you are making Pizza for tea, but then someone else decides that they want Fish Fingers? Of course the answer is simple you simply combine the two foods together to fuse together tastes that were destined to be with each other! 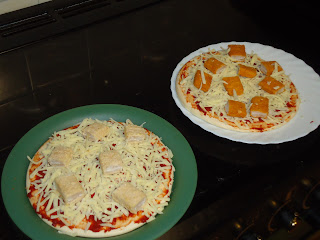 Whenever we have Pizza as a family we make our own. This is partly due to Daddy not eating wheat and gluten, partly because we can never agree on what kind of pizza to get and partly because we don't want to take out an additional mortgage to pay for a meal each time we order a take away Pizza! Daddy was very good and decided that even though he wanted pizza and Top Ender and Baby Boy wanted Fish Fingers that combining the two would make a good dinner and so he made the pizza's, added some fish fingers (his are the pale ones on the green plate) to the top and threw them in the oven to bake.

Whilst he was making the pizza he spread his paste right up to the edge. This made me really annoyed, as I told him that he needed to leave a small edge at least so that you could hold on to the pizza slice without getting topping on your fingers. Daddy was insulted that I was telling him how to make Pizza as nobody likes to eat the crust and so it was just a waste of food if the topping didn't go to the edge. It was at this point that Top Ender walked in to the kitchen and said;

"I hope that there is lots of crust on the pizza for me to eat!"