- March 12, 2011
At the end of January I was surfing the internet, when  I came across an article on Babble about home made Valentines Pop Tarts. I thought this was a genius of an idea and decided that I would have to make some at home for Top Ender, Baby Boy and I to share for breakfast. I completely forgot about them until I saw an update to the post about chocolate pop tarts and knew that I really needed to make them or I would be craving them for months on end.

So early one Monday morning Baby Boy and I made some and had a lot of fun together making a surprise chocolatey pop tart breakfast for Top Ender when she woke up. We started by cutting the pastry in to six as it said on the Babble website, but we soon discovered that these were going to be far to big for little tummies and so cut them in half again. 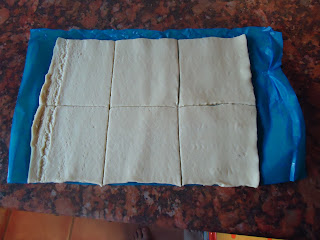 Adding a small amount of chocolate spread and sandwiching two pieces of pastry together was great fun for Baby Boy and he was quite neat, although I did need to sort a couple of them out by moving the pieces so they were square with each other. We used a fork to pattern the edges of the pop tarts and put them on to a baking tray. 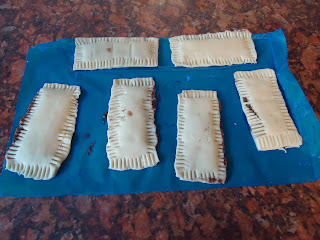 The cooked up lovely in just a few minutes and had a nice golden brown colour, of course I knew that they wouldn't be complete without some chocolate drizzle over the top. Unfortunately for Top Ender and Baby Boy I didn't want to get my icing tubes clogged with chocolate (been there done that) and so we just used a spoon to drip/spread/smear some chocolate on the top!

The result was six home made chocolate pop tarts which were actually pretty darn tasty. We all munched on them quite happily, especially me because the cost for making six home made pop tarts was less than one packet of "real" pop tarts and Baby Boy and I had fun making them!