- March 24, 2011
Baby Boy loves play-doh. I mean seriously loves the stuff, he would take the tubs to bed with him if it was allowed (it isn't and never will be!) and whilst I don't mind the stuff I don't think that it is an everyday play item. Mainly because it never seems to stay on the mat and somehow manages to find it's way into my carpet, and then in the evening Daddy scrapes the dry play-doh off the carpet and sort of shakes his head at me.

I don't think he believes that I don't encourage the children to put it on the carpet.

At the weekend we went to a birthday party (You know I told you about it the other day when I said you could make your own wrapping paper) and the one game that both Baby Boy and Top Ender loved was pass the parcel. It turned out that Top Ender won and inside was a couple of mini tubs of play-doh and a mini Fun Factory Press which she passed to Baby Boy to have, knowing his love of squishy stuff. We managed to make it to Wednesday before Baby Boy remembered where I had put the play-doh when we got home and so it was agreed that he could play with it in the living room on a tray and mat. Baby Boy sat quite happily making an assortment of various foods, animals and shapes with me watching admiringly from a distance as I'm not allowed to play. Suddenly Baby Boy rushed over to me, tears in his eyes and looking worried.

"What's wrong?" I asked
"I'm going to be siiiiiiiick!" he cried

I knew he was serious and so we quickly rushed to the bathroom, where he calmed down and apart from a small amount of spit being spat into the toilet nothing happened.

"What made you feel sick?" I asked

There was no answer, but I knew suddenly what it was.

"Baby Boy, did you eat the play-doh?" I said as I tried to stifle my giggles
"Yes! Play-Doh makes me siiiiiiiick!" he wailed

I think he will stick to eating cakes in the future. 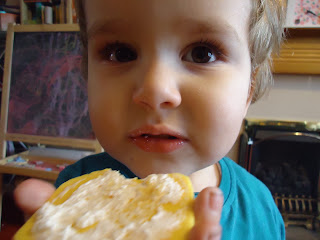