We love building here, and are often found creating giant towers that are as tall as we are so when we were offered HUGE blocks to review where building tall towers would only take a fraction of time we were really excited. When the huge box arrived we were really excited and straight away built a tunnel with a roof for Top Ender and Big Boy to play in despite it only being 7am.

Top Ender was really upset that she had to go to school, but Big Boy and I spent the rest of the first day building forts, castles, towers, bridges, chairs, tables, sofas, houses and hundreds of other designs! Of course as soon as Top Ender came back from school we were back to making more sculptures and they have been a firm favourite since they arrived.  There are enough bricks for plenty of designs, but Daddy and I were thinking that we would like to add some more for better builds and having looked on Argos, we have found that they make a smaller set as well as the Mega Pack.

I would recommend buying two of the bigger packs, for some more detailed designs, but one pack does a great job! Yesterday night after we got home from a day out, we went into the garden and took the bricks out with us. Top Ender and Big Boy were plotting together and they built a couple of walls at either end of the garden, before using pester power to get me to agree to let them have a water fight. They used the new brick walls to hide behind in their water fight, and loved every minute of it! 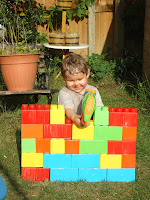 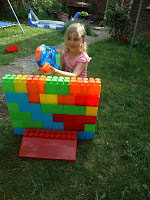 The Chad Valley Blocks Mega Pack is currently available from Argos for £59.99 and the smaller set are £19.99. Until the 29th July 2011 there is a multi-buy offer where if you buy both sets you will get £10 off, which I think is a great deal.
Toys