- June 16, 2011
Over at Him, Me & Three Heidi decided to tag me in a meme that she received in her email as she thought it would be fun. You know what? She's right! So I present to you The Last Word Meme...

Thing you ate - That would be my dinner which was Sausage pie and some Mac and Cheese from Amy's Kitchen. It was yummy and rather good for my tummy! 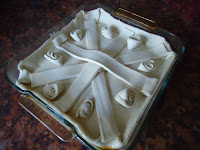 Text message you received - From Daddy, telling me that he wasn't dead just busy!
Film you watched - That would be Paul!
Song you listened to - Miss Mouse song from Show Me Show Me as Big Boy sang it to me.
Book you read - Friends, Lovers And Other Indiscretions by Fiona Neill
Programme you watched on TV - I'm just watching it now it's Lie To Me.
Live concert or performance - Top Ender's concert!
You cried - Today, my knee was really hurting.

Thing you bought - A new head for Big Boy and Top Ender. Don't ask.
Thing you lost - My wallet on Saturday gone, turns out it was in the car all along.
Gift you gave - I left a little gift for Daddy on his phone.
Great bargain - Dinner out at Red Hot World Buffet the other day. Time you said "I love you" - About two seconds ago to my husband!
Time you were starstruck - Erm two weeks today when I meet Keith Allen, yes I am predicting this...
Holiday you went on - When I went to The MAD's last year!
Website you looked at - Other than my fantastic blog and that of Him, Me & Three? Well that would be the list of Mummy Bloggers at Tots 100 and I was at Glowstars and Who's the Mummy? tonight too.
Bit of good advice you received – who was it from? - "Go to bed soon" from Daddy.
Admired someone and why - There are so many people that I admire, but I am going to show my religious side again and say President Thomas S.Monson because I was reading through the talks from the 181st Annual General Conference earlier today and I was just so Molly Mormon about it all.