Our back garden is a paradise for children. During the holidays like this current half term or the long summer holidays we like to spend time together playing and creating imaginary worlds that we can all share in. Of course that doesn't mean that I don't let Top Ender and Big Boy play games on their own, they do get some unsupervised (well supervised at a distance really) time to create games themselves, but I know that everything that is in our garden is safe and fun.

That is why when we were sent the Chad Valley Combo Play Set Tent to review, Top Ender and Big Boy weren't the only ones to be excited. I was excited because Chad Valley is a brand I know and trust and because other Chad Valley toys we have had in the past have been well made. Top Ender and Big Boy love this tent for it's bright colours, its size (it is perfect for them) and have spent the last few rainy days playing in the living room with it. Big Boy has refused to come out on two occasions and has eaten his dinner in there and even Top Ender asked if snack time could take place in the tent!

Yesterday was the first time they had a chance to play with it outside though, together they carried it out in to the garden, found the perfect spot and set up camp. As the tent is pop up they didn't have to worry about doing anything other than putting it down where they wanted it! They played for three hours with the tent, creating a magical world where the tent was their home, and to get to different areas you had to crawl though the tunnel. 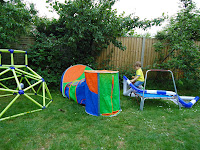 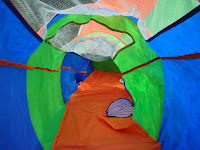 These pictures were taken by Top Ender and Big Boy, who love this tent set so much they are recommending that every child should have one for Summer.

The Chad Valley Concertina Play Tent, Tunnel and Cylinder Play Set is currently available from Argos for £23.99, with an RRP of £29.99.
Summer Toys