- June 03, 2011
We were sent a Lego Duplo Police Station set to review as part of the Lego Duplo Experts programme we are part of.

When the Lego Duplo Police Station arrived, I am not sure who was more excited as Daddy's eyes lit up as much as Big Boy's did. I knew that the first chance they got that they would be busy building the station and the first morning that they were up early together they started building the station with Top Ender. The station itself has several ways to be built, it can be built as Daddy and Big Boy and Top Ender did or built as a tall tower, or in any way that you can imagine and you have enough bricks for! 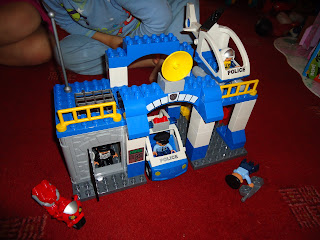 Big Boy and Top Ender love Duplo, and they played with the set for ages creating different  imaginary worlds for the policemen and the thief to live in and it has led to some other role play games for Big Boy and I pretending to be policemen going about our investigations! The great thing about Lego Duplo is that it is sturdy stuff, it has taken some beatings from BB in the last few weeks and still looks as good as new and because it is made out of plastic I have no worries about throwing it in the sink to give it a wash when BB has got food all over the bricks!