Frankie and Benny's - A Review

- June 13, 2011
Vouchercodes.co.uk paid for our meal at Frankie and Benny's to do this review. Which was nice of them.

Going out to a restaurant with your family it is best to have a recommendation from someone else who has been there previously, which is why in part VoucherCodes.co.uk came up with the Most Wanted Fuss Free Dining Report. When they told us about the Fuss Free Dining Report, we loved the idea as it isn't just what parents think about the restaurant, but also what the children think and so after a short decision process (I read out the names of some restaurants and Daddy said Yes or No to going) we decided to go to Frankie and Benny's.

As long term readers of the blog will know, Daddy is a celiac and so going out to a restaurant with him takes a little extra planning, luckily though Frankie and Benny's have the full menu available to view on their website so before we went to the Milton Keynes restaurant we were able to check through and see what was on the menu and decide before hand what we wanted and what we thought would be gluten free. To double check though, when I called to book the table (always important as family friendly restaurants tend to get busy at peak times for Family dinner) I asked the waitress who answered for some help. This waitress was so helpful and friendly and went through the menu pointing out a few dishes that were gluten free naturally (ones that we had already picked out) and which could be adapted if we asked. The waitress did point out that as Frankie and Benny's make pasta and pizza in the kitchen that there was flour around and so there was a risk of cross-contamination but if we had a word with our server when we ordered our meal they would have a word with the kitchen to be extra careful. 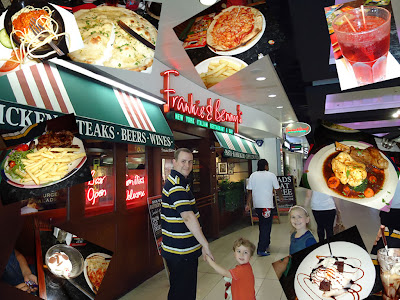 The Frankie and Benny's children's menu is split in to two, with a Kids menu and a Junior menu which are for children up to the age of 11. The Junior menu offers dishes that are slightly bigger than the Kids menu but both Top Ender and Big Boy decided to order from the Kids menu. The Kids menu is a fantastic deal with a refillable soft drink, a main meal and a pudding all for £3.95 and the Junior menu is only slightly more with the same deal but at £6.45. The main menu, isn't in my opinion as good value as the children's menu (or in comparison to a meal we had in Central London a week before) but did have a wide range of different foods and the prices were in line with other restaurants in the area.

Almost as soon as we were given our menu's the waiter returned with two activity packs and two balloons for Top Ender and Big Boy. The two small cardboard bags were filled with a coloured pencil (the sort that has lots of colours running through the middle) and an activity book which had colouring pages, a few games and a board game. Top Ender and Big Boy loved the packs and sat quite happily playing and colouring until their meals arrived. The balloons did prove to be problematic as they were filled with Helium and so kept trying to float to the nearest air conditioning unit! Even when tied to my handbag, they kept bobbing around over the table and so whilst balloons are a nice touch, it might of been better to present them to the children when we left the restaurant.

Our food arrived quite quickly and the waiter didn't seem to think I was too odd for taking pictures of it all the dishes (or if he did he hid it well). The food was nice, it was well cooked and by far the best value of the night was Big Boy's pizza which was HUGE. I was a little disappointed with the size of Top Ender's Spaghetti Bolognese in comparison to the pizza, but Top Ender had ordered from the main menu a side order of Garlic Bread and a side of fries to share with Big Boy and she had a piece of Big Boy's pizza so her meal was a suitable size for her. The side order of fries had more fries than those with Daddy's order of steak and so he helped himself to a few more and I was a little disappointed with the presentation of my meal as my vegetables were hidden underneath a pile of mashed potato... 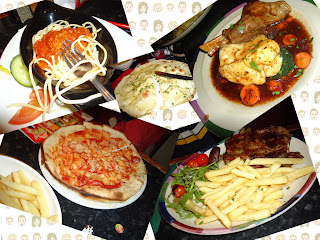 As always happens with children and large drinks, a trip to the toilet was soon needed. I had to ask where they were as there wasn't any visible signs (well where we were sitting there wasn't) but found the toilets to be big clean and bright. In fact compared to the restaurant lighting the toilets were too bright as we spent the entire time in the bathroom adjusting to the bright light and then were plunged into relative darkness when in the dining area again. 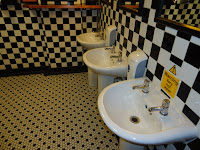 In fact that would be my only big downside to the Frankie and Benny's restaurant, it was too dark. I know it is to add ambience, but if I wanted to eat in the dark I would go to Dans Le Noir? (which is on my list of places to eat thanks to some very knowledgeable food bloggers who have suggested it as a must do on my next trip to London) and yes your eyes do adjust eventually, but Daddy who was facing the open kitchen (where the lighting was brighter) had a harder time adjusting every time he looked up from his plate.

Despite the fantastic service we had over the telephone, our waiter didn't seem to understand our request about the details of what was in the ice-cream sundae that Daddy wanted to order (I thought rightly that the malt balls may be a popular honeycombed chocolate ball snack) and despite being asked to not have the malt balls in his sundae they arrived anyway. We all enjoyed our deserts though and left the restaurant having had a great time together.

The Most Wanted Fuss Free Dining Report gave us some scoring sheets, which have been filled in and are here for your amusement...

That's right the children gave Frankie and Benny's full marks with 25/25 and us adults were slightly less impressed but still gave a decent score of 22/25.
Gluten Free Restaurant