- June 16, 2011
When we were in London for The Leapfrog Short Film Festival Final, we decided to hang about in London for a few hours that evening to enjoy the sunshine and to have a meal out together, something which we hadn't done since February (you know when Big Boy got his face pushed into a chocolate cake). We knew that Leicester Square was a short walk from Covent Garden and so decided that as we knew there were a few restaurants around the outside of the square we would head down there. We were undecided about going to The Mermaids Tail or one of the chain restaurants and it was only when we were in a queue for Chiquito's we decided that we would rather try The Mermaids Tail.

We were seated quickly and the restaurant wasn't busy, but had a healthy number of tables with people sitting at them. We ordered our drinks quite quickly, with a glass of squash for Big Boy and Top Ender and lemonade for Daddy and I (we do drink other drinks when we go out!) and had plenty of time to look at the menu. There was a second menu on the table which was a Two for One specials menu. Daddy and I decided to order a huge 16oz rump steak from this specials menu which meant that instead of costing £16 each it was only going to cost £8 each, this was a BIG bargain (and now you know why we thought the meals at Frankie and Benny's a week later were so expensive!). 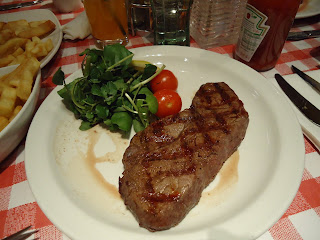 As the steak didn't come with anything, we decided to order a side portion of fries (I don't think Daddy or I realised just how big a 16oz steak is!), but as we hadn't really eaten anything during the day we figured that we could gorge ourselves without worrying too much about it!

Top Ender went for fish and chips and Big Boy decided on home made fish fingers and beans, it was only afterwards that we realised that the fish could be cooked in a gluten free batter which would have been perfect for us with Daddy being a Celiac. 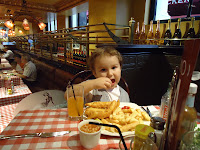 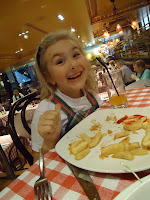 The chips are all home made and cut bigger so that less oil is absorbed which is a good health benefit, and all the fish comes from sustainable stocks which is something I feel strongly about. There are after all only so many fish in the sea! Big Boy again seemed to get a huge portion, with one his fish fingers being the same size as Top Ender's piece of fish. Luckily when Big Boy and Daddy went to the toilet, Top Ender was able to eat one of his fish fingers to help Big Boy finish his meal and also to increase the amount that she had to eat!

The meal came to £38.00 (including drinks, but not including service) which for a meal in the centre of London we thought was a bargain. We wouldn't hesitate to go again the next time we are in London and give it a big thumbs up for portion, price and service.
Gluten Free Restaurant