Top Ender is very much a Barbie girl and was waiting for the Barbie Princess Charm School DVD to be released at the end of August, so that she could use her Summer Holidays savings to purchase it. When on Saturday the postman delivered a parcel to me containing a preview copy of Barbie Princess Charm School I was suddenly propelled to superstar status with the promise that we would watch the film together that afternoon. 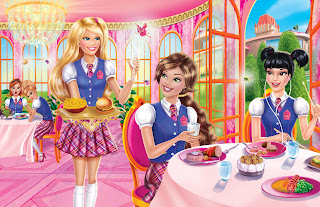 Barbie Princess Charm school is about a young girl called Blair Willows, who is a kind but slightly clumsy young girl and is chosen via a lottery to attend Princess Charm School. You see even in Gardinia (where this is set) before you can become a Princess or Lady Royal you have to have some training to build character and to learn the proper etiquette for being a princess! 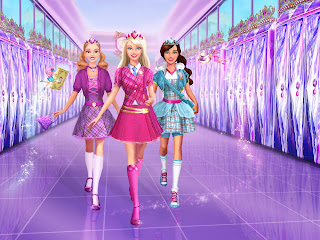 Blair attends the school with several young ladies of her age and shares a room with Princess Hadley and Princess Isla (The Princess Charm school is a boarding school). They tell Blair the legends of the royal family of Gardinia including the tale of how some believe that the Baby Princess Sophia somehow survived the terrible accident that killed the rest of the royal family leaving the Queen's niece (Princess Delancy) next in line to the throne. As long as she passes the tests at Princess Charm School that is! 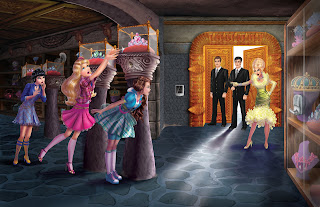 There are two evil villians, the soon to be crowned Princess Delancy and her mother Dame Devin (who is an etiquette teacher at the Princess Charm School) both of whom take an instant dislike to Blair and try their hardest to have her expelled. Blair doesn't let anything get her down however and keeps trying her best as she is doing this for her younger sister to have a better life. 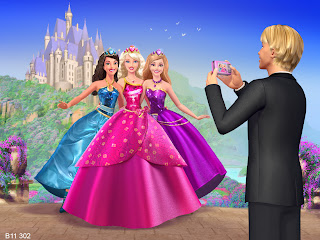 The film is bright and colourful and easy enough to watch even is the story is predictable. The good thing about predictability though is that it is easy to understand and has the important happy ending and a confirmation that everyone is a princess even if they haven't been brought up in a castle or have a Queen or King for a Mum and Dad. The DVD is a must have for any Barbie fan and watch out for the merchandise to go with this latest film. 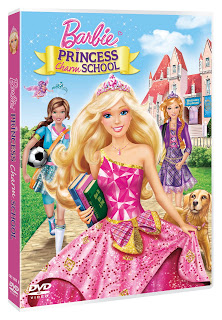