- August 12, 2011
We received the Wooden Stringing Beads from Letterbox to review.

I had found the letterbox website a few days before they asked me if I would like to a product for Top Ender and Big Boy to review and had been marvelling at some fantastic products. When they asked if it would be okay to send a surprise I knew that we would be in good hands and a few days later the Wooden Stringing Beads turned up. The packaging said that they were suitable for children aged four and over, but anyone who has ever met Big Boy knows that telling him that he isn't allowed something is as much use as a chocolate teapot! 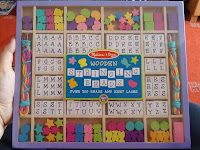 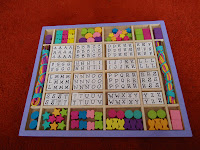 So Top Ender, Big Boy and I sat down in the living room and started threading shapes and letters on to the threading laces. We decided that we would each create just a string of beads that was in a pattern pleasing to us and we had a good giggle looking at the different shapes and getting Big Boy to read the letters out as he has just learnt the alphabet.

There is a negative to this packet and that is when you take the plastic off that holds the beads into the box there is no lid to put on the box. Even with Top Ender, Big Boy and I all threading beads on to two laces each there were shapes and letters left over. This means that there is no where for us to store it without losing pieces. At the moment we are hoping that it won't be knocked for a third time off the dining room table as picking up the little beads is really annoying! It was a really great afternoon but I think that out of all the laces that we threaded mine was the best. Don't you? 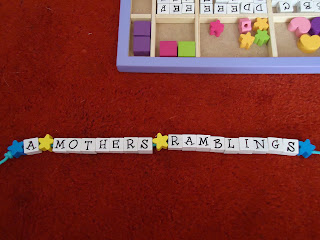 The Wooden Stringing Beads set is available from Letterbox for £14 +P&P and is suitable for children aged 4 and over.
Toys