Big Boy loves Lego Duplo and almost everyday we have it scattered across the floor making up wild and wonderful creations. Since finding out that it fits with the ordinary Lego too we have made some truly amazing city scapes and Big Boy likes to make farms for his tractors to plow too. When a big package for review arrived during the Summer Holidays Big Boy was very excited to see that it was Lego Duplo scenes from his favourite film Cars 2! I managed to persuade Top Ender and Big Boy that I had to make up the scenes with them before they could play with the sets and quickly took a few shots of the different sets.

The first set we made up was the Agent Mater set (which has an RRP of £13.49) which was great fun at aiming the missile at the two brick targets included with the set. Big Boy soon came up with the idea to see who could get their missile to go the furthest though and so with the help of Top Ender they were eventually launching the missiles down the living room and measuring the distance covered! 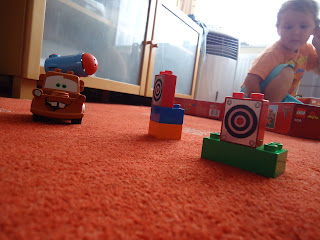 I then opened up the Big Bentley Lego Duplo set (which has an RRP of £40.99) which comes with Finn McMissile, Lightning McQueen and of course Mater! I loved the Way Out sign and when Big Boy and Top Ender were allowed to play with this set very quickly set about creating different situations for the three cars. You can't really see Big Boy, but that is his knee in the edge of the shot! 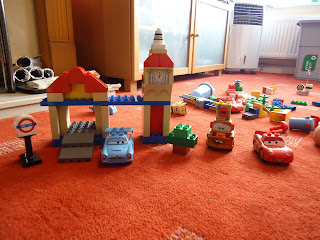 Big Boy decided that he wanted to get in on the action as I set up the Luigi's Italian Place set (it has an RRP of £20.99) by moving directly into the middle of the building area. Luigi and Guido were great fun to play with and with the spare tyre fitting on Guido we were soon zooming him around making the quickest pitstops in history! 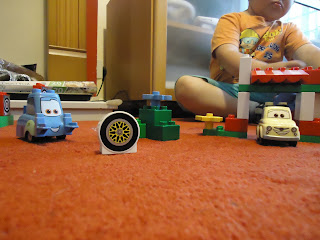 The last set I think was also my favourite as the Tokyo Racing Set (An RRP of £25.99) really made me smile as with just a few simple bricks the background scenery made me think of Tokyo! Plus there was the famous Brazilian Racing Car Carla Veloso to race Lightning against... as you can see Big Boy is about to do in the picture below! 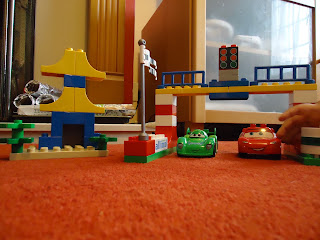 Big Boy and Top Ender sat all afternoon quite happily racing the cars around the living room, creating different scenes and situations and have played with it several times since. Big Boy has even sat clutching the cars from the original movie whilst he watched it on DVD and has asked to go back to the cinema to see the sequel again!

One of the things that we love about the Lego Duplo blocks is that they are sturdy enough for little ones to play with and simple enough to put together and take apart that a three year old (and me) can do it. I don't think that it is just because of the bright colours that makes Duplo so irresistible to play with, or the Cars theme but Lego Duplo itself is just fun to play with!

It turned out later that night that it wasn't only Big Boy and Top Ender that the lure was to great for as I found Daddy sitting on the floor at 10:30pm playing sorry re-building the sets all whilst attempting to recreate the Disney film!
Toys