- August 19, 2011
Growing up I remember having Afternoon Tea at my Grandparents on a Saturday afternoon with my family. There were always sandwiches with the crusts cut off and fondant fancies and other small slices of cakes and of course a pot of tea for the grown ups and orange squash for us children. It was something that we looked forward to, the weekly Saturday Afternoon visits and the treat of cakes and being allowed to sit in the living room instead of the dining table. As a child I didn't understand the comfort of the routine, I just liked the cakes but I was being taught the family Afternoon Tea tradition without knowing it.

Top Ender and Big Boy often play tea party, and this Summer they have so much fun together pouring water from their teapot and orange squash from a milk jug into little cups and pretending to eat sandwiches and cake. I have joined in on several occasions and I have been teaching them the unwritten rules of an English Afternoon Tea as opposed to High Tea, which is something very different. Top Ender and Big Boy had been so well behaved (with a couple of goals having been reached) that I decided that they deserved a treat of a proper afternoon tea on our formal dinnerware. We don't often use our formal dinner set so Top Ender and Big Boy were very excited about seeing the posh tableware coming out of the cupboards. 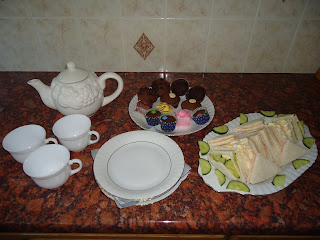 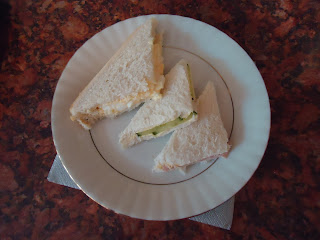 The important part of an afternoon tea for any child is the cakes and Tops and BB were lucky to have a large selection of cakes to choose from. We had to have fondant fancies as a tribute to the afternoon tea's of my past, and Big Boy and Top Ender both choose their favourite cakes too so we ended up with small chocolate topped cakes and a selection of differently topped Chocolate fairy cakes. They had to obey the unwritten afternoon tea rule of eating all the sandwiches before having any of the cakes, but they were allowed to be over indulgent on the cakes and did manage to consume more than they probably should have! 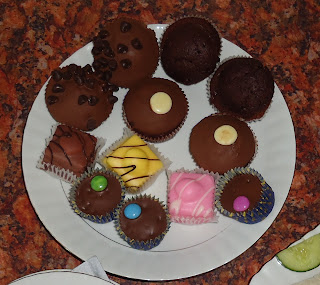 The last part of afternoon tea is probably the least important part for non tea drinkers like Top Ender, Big Boy and I but we did know that we had to use the teapot and tea cups for our Orange squash to keep up the formal afternoon tea image! 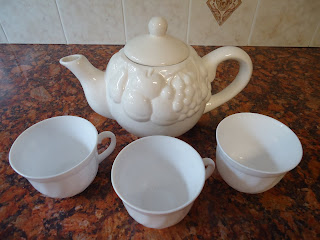 The afternoon tea was a big success with Top Ender and Big Boy and they are looking forward to having afternoon tea again soon. Although I think that they might be more interested in the cakes than the sandwiches!
Family Life