In one short year Big Boy will be starting school, before then though we are going to cram in as much fun as possible and complete as many things from our Things to do before Starting School List. One of the items on this list is to learn to swim and so when Speedo sent over some products from the Sea Squad Learn To Swim range we knew we had no excuse to achieve this goal! 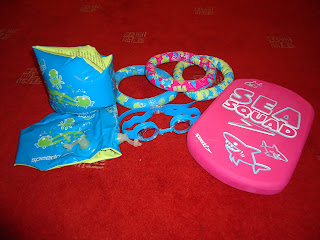 The Speedo Sea Squad Website was launched in January and is a good site for children to explore and has some great downloads available for keeping track of your swimming progress. This is great as it helps me to know what to encourage Big Boy to do when we go to our local pool. There are some great videos and printable guides for parents to use as a resource and you will see soon there are some mentions on my facebook page as I have linked the two up. Sorry I couldn't help it I am a Social Media Addict! Top Ender has had a play on the Kid Zone area of the Speedo website too playing the game, printing door hangers and pictures to colour in!

So what did we think of the goodies that were sent?

The Speedo sea squad armbands were Big Boys favourite as they had green on them, and anything green is a big hit! I had a bit of trouble blowing them up and deflating them initially because the Valve seemed to be stuck, but I soon discovered the knack of blowing up and deflating the armbands. They were a good size too, as they weren't too bulky on Big Boy despite being for an age range of 2-6.Daddy thought that they were a bit thin, but I think it is because the armbands are PVC free. The RRP for the armbands is £7.

The Speedo sea squad googles have been used for almost everything by Big Boy. I was chopping onions and so he used them, he had his hair washed and so used them and he was dressing up as a superhero and so used them! I take it to mean that they are comfy and as the nose band and the strap for around the head are both adjustable you can get just the right fit for just about any head. Unlike some goggles that we brought for Top Ender (they were Speedo too) they didn't seem to have anti-fog and so we were constantly cleaning them. The RRP for the googles is £5 and the frames are made of silicon with the lenses being polycarbonate.

The Speedo sea squad dive rings were jumped on by Top Ender as soon as the packaging was open. When Top Ender was having Swimming lessons to build up her confidence in the water (she could swim she just wouldn't believe us when we told her) the instructor regularly threw rings or sticks into the water for Top Ender to collect. The idea is that children dive to the bottom of the pool to retrieve the rings and this increases their confidence in the water. We invented a lot of games with the rings when we were in the pool and even Big Boy had fun hunting for them in the water. The RRP for the Rings is £12 for three.

The Speedo sea squad Minikick is a much more manageable size than other floats that we have purchased in the past, which means that it is easier for Top Ender and Big Boy to handle. I never understood the purpose of a float, but Top Ender's swimming instructor explained that they help to improve (and develop) kicking technique as with the arms not doing the work the legs have to! There was a lot of fun in the pool with the float, the only problem was trying to get Top Ender to put it down to practice using her arms too! The RRP for the Minikick is £7 and it is made from EVA. 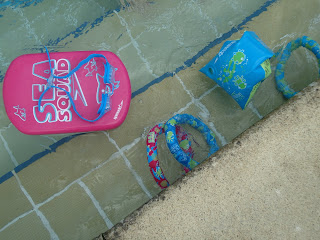 I know that these products are available from other outlets (I saw them in Sainsbury's) and that if we keep going to our local pools that Big Boy will be swimming in no time!
Review