- August 02, 2011
When we were in Dorset we drove to Durdle Door, as something that Daddy and I always comment on is that in the United Kingdom nothing is ever that far away (we are an island after all). It was a glorious British Summer morning and so we thought we should have a bit of fun and walk down the steep 800 meter long path and down the scary steps (I nearly turned back around and went back up as the stairs got narrower and I started to panic a little) to the beach and sat down on the shingle. For those who don't know Durdle Door is part of the Jurassic Coastline of  Dorset and Devon and is a World Heritage site (yes all 95 miles of it) and it is a nice place to sit and paddle as the beach is sheltered and so it doesn't get too windy. 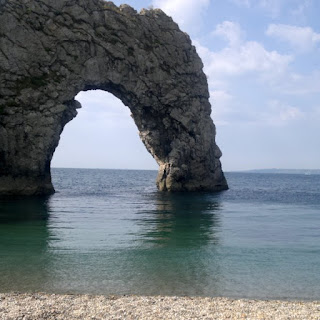 Top Ender and Big Boy weren't disappointed that there was shingle instead of sand on the beach at Durdle Door and set about building stone piles instead of sand castles. We had taken buckets and spades down to the beach but it wasn't easy creating piles using them as the stones just kept sliding off each other! Top Ender then decided to create a hole deep enough for the whole family to sit in, which even with the help of Big Boy they soon discovered that this wasn't easy going so they gave up and wandered down to the waters edge to have a little paddle. The water was cold but it was refreshing on such a warm day and they were enjoying themselves so much that Daddy and I soon joined them. 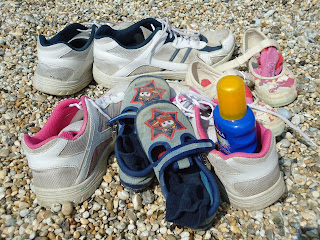 I know I said this the other week in I must go down to the sea again, but the beach is a place for children and childlike behaviour, a place for grown ups to be children again and I can think of no better way to relax and renew your energy and your faith than by paddling in the sea with your trousers rolled up around your knees. 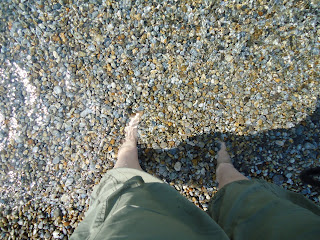 If you are ever in the Dorset area take a trip down to Durdle Door and have a paddle or stand on the top of the cliff and look down at Durdle Door and Man of War Bay. I promise that you will not be disappointed with the view.
Free Days Out