- March 07, 2016
Like I said last month, every so often I share on Facebook, short tales of funny moments that have happened in my life, because as we all know, I apparently live in a British Sitcom.

These things are things that don't warrant a full blog post, but I've decided that I'll collect them together in a blog post and post once every month so that we'll never forget these stories which make us laugh so much and hopefully will make you laugh too! Daddy sent me a text message asking if there had been a delivery. I asked Tops to go and check as quite often, if the parcel is small enough our Amazon delivery guy just posts it through the letterbox.

Just after I text Daddy back to say that there wasn't, the doorbell sounded. So off I went to the front door to sign for the package.

Instead there stood Daddy, as he'd got an earlier train home and decided to surprise us!

Okay. so not funny haha, but definitely fun!

Top Ender and I have Google Location enabled for each other on our phones.

I wanted to check if Tops had left School as I wasn't sure if she had a rehearsal or not. I saw that she was more than likely about to walk down our road, so I asked BB if he wanted to go open the front door and see if he could see her (it's one of his favourite things to do) as Tops would be home any second.

As soon as I finished saying that, the doorbell rang and Top Ender (who rang the doorbell) couldn't work out why BB and I were cracking up.

I have no words for this. Let's just say this is my life on Car journeys with my family.

Yes, yes they are "mooing".

Daddy and I were playing a game, where we were finding him a new wife, a back up plan of sorts for when I die. (I'm not announcing breaking news there, it's a joke like calling me the current Mrs W!).

Anyway. We were walking down the street and saw two women talking to each other at the Bus Stop. The first woman he didn't think would fancy him, but the second he was sure would.

It was only as we drew nearer he realised the second woman was actually a man with long hair...

Daddy claimed to have done some DIY whilst I was at Church and had a small accident. He wouldn't tell me any more than that.

I eventually found this. 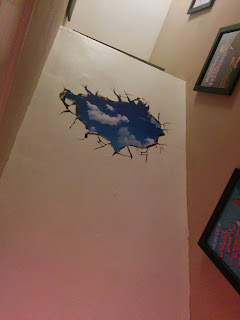 It's just a sticker thankfully and has now moved into BB's bedroom!

So those are the funny moments that I can remember from February. Did anything funny happen in your house last month?
Family Life Funny