- March 08, 2016
I love Mother's Day, not because I get gifts or a card or because the Children are extra nice to me. I love Mother's Day because for one day a year, people don't look at me oddly for wanting to spend time with my family. They don't look at me oddly because I won't to tell the women in my life that they have had an impact on me and have made me a (hopefully) better woman.

This year, Big Boy was up super early as he was so excited to give to me the gifts and card that he had worked so hard on. Big Boy got up, went and opened the curtains downstairs (normally my job!) all before coming back upstairs and trying to quietly creep into my bedroom to check with Daddy if it was okay to wake me up. What BB didn't know however, was that I was already awake and had been for about an hour. After a brief cuddle in bed, BB bounded off to his room to hunt out the gifts that he had hidden for me. He was so happy when he presented them to me and I was too, because these gifts were made for me by him. 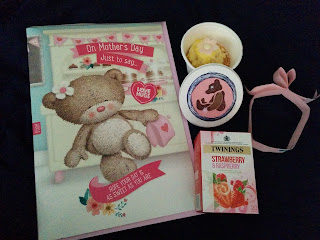 BB's card had drawings inside that he had drawn just for me because they were things that I liked. BB had got me some Fruit Tea, because it's one of my favourite drinks (especially when I'm on a diet!) and the Cupcake he made at Beavers for me. The funniest moment for me was when BB announced that he would eat the Cupcake for me because he didn't want me to worry about the calories!


I was left to my own devices upstairs, as Daddy had taken BB downstairs to have breakfast (Top Ender and I were fasting as as well as being Mother's Day it was Fast Sunday being the first Sunday of the month) and I was text messaging my Counsellors and a couple of Teachers over last minute plans for the day.

And then Top Ender appeared. I thought that she had been sleeping, but she had been getting ready for Church and completing her Scripture Study for the day. She popped into the my bedroom, asking if it was possible for her to have a moment of my time (so polite!).

Tops presented me with her gifts. A vase of flowers she had made at Guides, a print that she had been working on with her Art Teacher 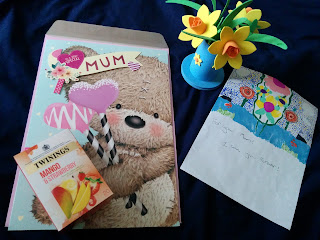 Weeks ago Top Ender had been telling me about her art work, and about how her teacher had been so happy about the extra effort that she had been making over creating this piece out of lesson time based on art work they were studying in the Art Lessons. Tops had been given extra credit in the form of Vivo rewards points and the detail (you can't really see it in this picture) given to the design is amazing, Tops must have spent hours on it!

And then of course we were off to Church. We had had other plans for the gift this year, but when some rather important parts didn't arrive in time, we switched to another token gift. As you can see below, we put some Love Hearts and Key rings with a quote by Elaine S. Dalton inside. 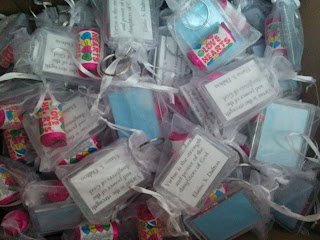 The quote says (just in case you are interested!);


Virtue is the strength and power of the daughters of God. Elaine S. Dalton

I think they looked cute and I hope that the women in my home ward thought so too!

And so that was my Mother's Day. How was yours?
Drinks Family Life