- March 28, 2016
The third week of the Cambridge Weight plan saw me start in high spirits.

At my weigh in I had only lost three pounds, but my husband said to me losing three pounds in a week is brilliant and my Sister had believed me about the weight gain over my period week... so we were looking forward to the week end where hopefully I would lose the five ish pounds I normally put on AND lose some extra weight because of being re-motivated.

And I was motivated again.

All week, I was thinking about small goals and achievements.

Like, how when I get to 13st 3lbs I'll no longer be considered Obese, just fat.

I was thinking about what I might weigh by my birthday.

I was thinking about what I might weigh by BB's birthday.

I was thinking about what dress size I might be down to by June, when two of my very lovely friends get married.

And this week it was those thoughts that spurred me on. I think that I actually did really well, as it was the first time I was faced with "real world" situations too.

My Mum and I went to a Cafe and she ate a meal whilst I nursed a Hot Tea. 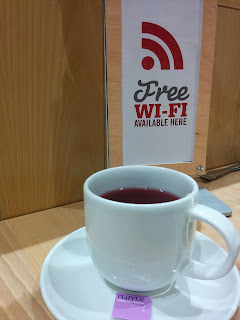 I took BB to McDonalds and I didn't buy anything for me and refused to tax him on his Chips (you all do that right? If you buy Chips for someone, or someone you know well comes close enough to you after having got themselves some chips you're allowed to have one as the Chip Tax... what do ya mean I'm the only one who does this?!) waiting until I got home to have some soup.

And then the real turning point for me came. I was so busy cleaning and tidying my home on Thursday, that it was 2pm before I realised I hadn't actually eaten or drunk anything that day.

I'd practically fasted (Something I do as part of my Religion once a month) all day and hadn't batted an eye.

Come the weigh in that night I was now 18st 13lbs.

I'd lost 2 stone in three Weeks!