The Cambridge Weight Plan - Week One

- March 14, 2016
I wasn't going to do weekly round ups or anything like that with regards to this diet, I thought that the occasional mention would suffice, especially when I hit certain milestones.

You know, like how losing a stone in a week is a milestone.

However, this week *you* my dear friends have taken it upon yourselves this past week to email me, DM me, send me texts and PM's to ask me questions about the first week on the diet, so here is how I survived Week One and be warned there are a few details that you might not want to know!

I apologise now too, this is a long one.

Knowing that I was going to be starting the Cambridge Diet on the 29th February, I took the previous week to bring my carbs intake down. I figured that the less carbs I ate the less shock my body might go into when it suddenly had a very restricted input! I can't say if this worked or not, but I do think it did and I also found that I wasn't as hungry as this low carb week went on. I guess I was resetting my appetite.

The first day of the Shakes, I had my first shake around 10am. Between getting up at 6am and getting the Children off to School I drank around a litre of water and I had a Fruit Tea whilst the Children were having their Breakfast. This of course meant that the toilet and I became really good friends. Honestly, I started off counting the number of times I needed to pee, but after the tenth time I figured that it was probably best I do something else!

My first shake was heaven. I had a Toffee and Walnut Shake and I made it with warm water, so it was more like a hot drink. It was lush and taking the five minutes to sit and sip it made me appreciate the drink/meal/shake more than I do with some other foods when I've eaten whilst doing a chore or watching TV etc.

The rest of the day was fairly uneventful. I didn't have any major headaches, I drank a tonne of water, several cups of Fruit Tea and generally didn't do much other than catch up on TV. Oh I did go shopping, but that was more about the need for a few items rather than distracting myself from my usual habits!

The second day was sort of the worst.

I knew what was going to happen, I'd been warned. Today when I went to the toilet I was well, lets just say I was prepared for the poo that I was expelling to be liquid. What I wasn't prepared for was the need to poop coming on so quickly that I had to run to the bathroom. If I hadn't been as quick, I may well have had to take a shower afterwards.

And the best bit about this? I pooped about four times that day and each was more disgusting than the last! Luckily the rest of the week my stools became firmer and I haven't yet suffered from constipation, which a lot of other people on the diet sometimes suffer with.

I had hoped that by day three I would be in ketosis (Bad for Diabetics, good for people who want to lose weight), and I was, I was in light Ketosis so I knew I was on the right path. I however felt a bit naff, but there are a lot of viruses going about at the minute and this was actually a cold not illness.

I experimented with a Shake and made it into a Thick McDonalds Style Shake, using Ice and water. 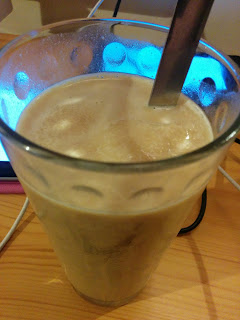 It was actually really lovely and I promised myself that I could have a "treat" shake like this once or twice a week as long as I stuck to the diet!

The rest of the week passed fairly quickly, I found I actually had more energy and when I tried on a pair of trousers that were normally a little tight and discovered they were a little loser than they had been I was really excited about my weigh in.

My Consultant aka my Sister had been chatting to me via Whatsapp most of the week. Sending me little bits of encouragement, checking I wasn't cheating or wanting to give up and that really helped. I'm not sure if she was giving me extra encouragement because she is my Sister or if this is what makes her a great consultant, but it was nice to know she was on the other end of a phone if I needed her.

Tops was also great, she sent me messages during the day, and for the first few days helped me by talking to me whilst I was preparing food for her and her Brother in case I felt tempted to nibble a sausage or something.

The last tip I have for others, based on my first week is keep yourself busy. I have Knitted a TONNE! For me it was replacing one bad habit (eating out of boredom) with another more productive habit. I have also read a lot, caught up on a lot of TV and taken a few nice little walks around the local area.

By the end of the week I was wanting to chew, my Consultant/Sister had said I could try Sugar Free Gum, but that it wasn't recommended as it could make me more hungry and if I did I should only chew for a couple of minutes. I chewed for a lot longer than a couple of minutes.

And so that was it, my first week on the plan!
Cambridge Weight Plan Diet Food Health Weight And Fitness What You Want To Read