The Really Great Day Ending With A Possible Broken Knee

A couple of weeks ago, Top Ender had the day off School.

Well, it wasn't a day off really.

It was a day for the Teachers across the School to meet with the Parents of the Students in their form groups for a Parents Consultation. You can read all about it in Top Ender's Consultation Evening.

This is the story of that day.
The day started out great.

Top Ender and I had visited with her Form Tutors almost first thing. We had a great Parents Consultation and happily set off together to go buy something yummy for lunch and to buy a Birthday present for a very dear friend to both Top Ender and I.

The rest of the afternoon passed with a couple of treats (Cinnamon Pull Apart Rolls which we really really should have shared with BB, but you know we were here, he wasn't!) and Top Ender's first viewing of Dirty Dancing.

Top Ender and I had a blast just hanging out together and generally having fun.

The day had been to put it simply, a great day.

Later that evening we picked Daddy up and dropped Top Ender off at Guides. Daddy and I drove home with BB and I started preparing an evening meal for Daddy (I'd eaten earlier with the Children).

I was just about to serve his meal when my mobile rang.

Daddy answered, after all I was a bit busy, and spoke to Top Ender's Guide leader... who explained that Top Ender had fallen over and her knee was swelling up and the knee cap didn't seem to be sitting right.

So. I quickly threw some things in a bag (Snacks, Bottles of Water, Tablet, Portable Charger, Top Ender's Phone, my Knitting and a couple of Books.) and we popped up to A&E. 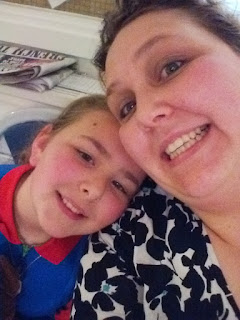 We spent hours sitting and waiting to be seen.

As is to be expected younger Children and those with sickness were seen first and Top Ender and I used the time to sit and read, and talk and watch a bit of the movies that were playing (Ice Age 2 and then Peter Pan), I knitted and we had a good old hug too.

Eventually, Top Ender's name was called and she was assessed, x-rayed and discharged with Top Ender hopping out of A&E on crutches within half an hour!

Luckily there was no broken knee.

Top Ender had some small amount of ligament damage (as it had been overstretched) and her knee was really swollen, but she was gradually starting to learn to cope with the pain and I'm pretty sure the painkillers she'd been given were doing something to help too.

You know, even despite the ending to the day, this was a really great day.
Family Life Health Illness