The "Not Very Good" Morning

I was tired after doing blood tests overnight on BB, (he's throwing out some odd numbers at the moment and he still isn't back to recognising lows when he's asleep) and to make it worse, my body had decided it hated me and was doing it's best to kill me for lack of gratitude for the recent egg it had produced.


So, like I said, it wasn't a very good morning.

And then it got worse, because I woke the Children up to get ready for the day and School.

Harsh words designed to cut to the core.

And I'm ashamed to say that some of those words came from my mouth.

It was too late once I'd said them of course. The look on the faces of the Children and I knew I'd hurt them, which in my anger I had meant to do but I hadn't actually wanted to do.

They apologised. I accepted.
I knew the words that they had used were defence mechanisms, it wasn't how they really felt.

I apologised. They accepted.
And yet it wasn't over. I had hurt my babies.

I had deliberately chosen words that had caused them pain. And yes I was sorry and yes they had forgiven me, but the stiffness in them as they tried to get their heads around the situation caused me to weep.

We prayed together and unlike other days where we then have a hug before they go off their separate ways today they didn't want a hug from me. This was clear from the body language, the way they backed away after the prayer.

I was crushed, but I knew I deserved it. I had hurt my babies.

I asked for a hug. I needed to feel them close to me.

I wanted to hug away the pain.

I wanted to smell the scent of Tops hair.

I wanted to feel BBs warm little pudgy hands in mine.

Together we stood and hugged in the living room. Tears streaming down our faces as we each forgave ourselves for the words we had said, as we truly forgave each other.

It wasn't a very good morning, but it got better. 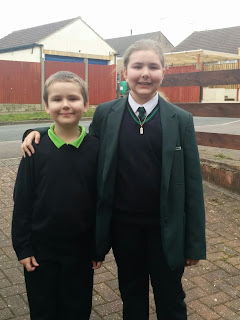