A Rainbows and Brownies Trip to Pets At Home

- June 22, 2018
Top Ender has been volunteering with a local Rainbows and Brownies group as a young leader for over a year now and I have to say it has been amazing seeing how confident she is, how great she is with the small ones (and not so small ones) and how much the Leaders properly trust and love her.

Recently, a trip was organised (on two successive nights) for the Rainbows and Brownies to visit Pets at Home, where they would learn about Animals, get some hands-on experience and of course the all-important, finish off some work that would qualify them for a badge. 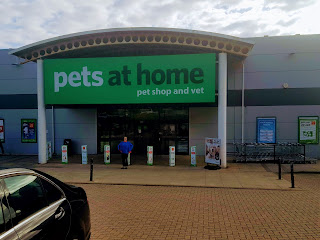 Top Ender as a helper was of course invited and had a brilliant time with the girls and animals and afterwards gave me, a quick rundown of all she had learnt about Rabbits, Guinea Pigs and Rats, all of which Top Ender had been allowed by the staff to hold and to help the various Rainbows or Brownies (depending upon what night it was) to hold and stroke too.

Tops explained that they had all sat in the Events pen, in order to not allow the various animals to escape, although one of the Rats had tried to make a break for it, which if I were faced with some giggly Brownies and I knew where the treat food was hidden, I'd probably attempt it too!

After the "cute" animals were all discussed, including how to care for them, the types of food they should eat, the habitats they need etc, the children went a group at a time to see the frogs and fish and were again given the information they needed to know how to care for the creatures, but this time no touching!

Top Ender noticed that one of the breeds of fish was called an Endler Guppy, which is close enough to Top Ender for both Tops and I to decide it was obviously named after her. Along with a tile shop, pizza shop and an Irish Petrol station... 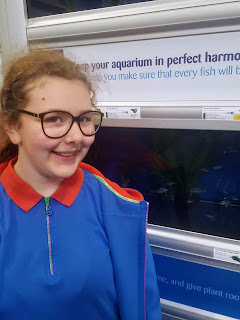 There was also a snake who was shedding its skin, but Top Ender knowing that if she took me to see that would be facing a long lonely walk home alone agreed not to even tell me where in the shop it was so I would take her home again.

The best part for me, however, was when I picked Top Ender up on the second night to see her standing patiently in the Events pen with the Brownies waiting to be picked up. I had a good giggle as to me it looked like the set up for some kind of human version of the "How much is that Doggie in the window" song. 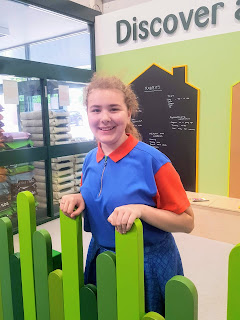 Of course, Top Ender was only too pleased to pose for me if only to get me to stop singing!

This all leads me to say that if you have a chance to sign up for one of the Workshops that Pets at Home branches run for children then totally do!
Family Life Free Days Out