Dan Jon's Adventure To The Phlebotomist

- June 20, 2018
Once a year Dan Jon has an annual blood test done at our local hospital. It's to do with his Diabetes and is just to check that he hasn't developed any other auto-immune diseases and I'm sure other stuff that I've forgotten since we were first told we needed to attend these appointments each year. Our most recent appointment was scheduled for 4pm on a Thursday afternoon, a couple of weeks ago.

Now; If you have been reading my blog posts over the last few weeks, you will have seen that Flyfour's car was off the road for a few days when he ran over some metal in the road and it caused a massive rip in his tyre. In order to go to work, you know so we could pay the bills to buy a new tyre, Flyfour needed to take my car to work.

Not a problem, but when you suddenly realise that you are responsible for a tiny human who has an appointment at the hospital that afternoon, you have to go on an Adventure. 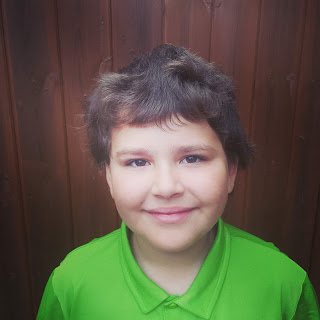 We caught the bus from outside Dan Jon's School and travelled to our local hospital. 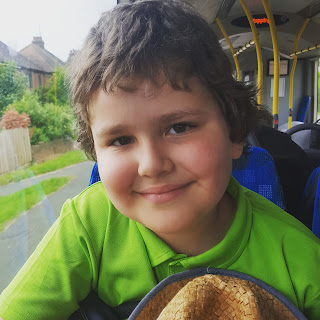 Once there, thanks to my fantastic navigational skills (Okay, so I just know the hospital really well) we found our way to the ward, checked in and hung out watching CBeebies, where both Dan Jon and I sat looking at each other asking if it was us, or if cartoons were really hallucinogenic inspired now or if they had always been that way.* 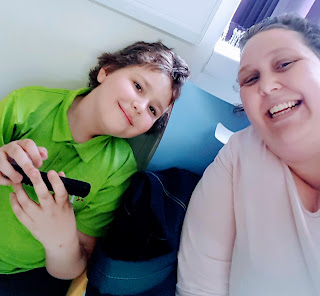 Eventually, we got to go and see the Phlebotomist and then we were, well... Dan Jon isn't really a fan of the annual blood test.

Each year, he remembers what happened the year before and of course, the first time where he is pretty certain the Phlebotomist attacked his arm with a rusty saw, is well and truly ingrained.

And each year, the phlebotomist tries and something happens that means afterwards, Dan Jon looks like this. 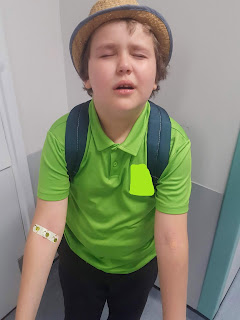 It's only with some form of bribery that he starts to look a bit happier. 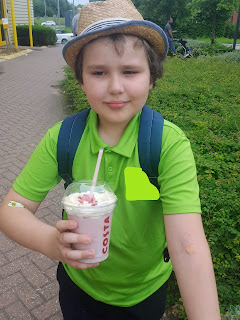 This year, after the initial bribe was being partaken of we carried on with our adventure. 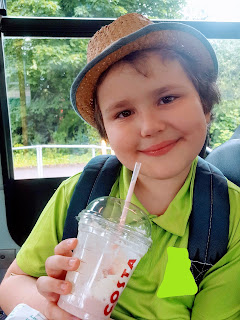 I think we might do it the Adventure way again in the future!

*Cartoons have always been that hallucinogenic, it's just you forget how wacky they really were.
Diabetes Family Life Life Lessons life skills