- June 25, 2018
Another week, another set of lunches almost identical to the week before! This is the last of the "freezer" sandwiches so next week will be a whole new range of ideas, like the Sunshine Yellow Summer Solstice Lunch Box Idea! 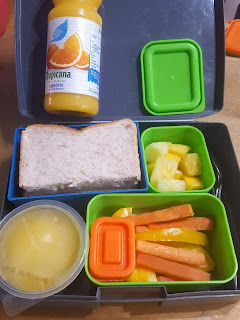 
The children loved these last week, as did a few Governors who were surprised that you could make Savoury muffins, as I turned up to the meeting with them to snack on having remembered I'd not eaten all day just as I was leaving the house.

I'll serve these with flavoured water and Cucumber sticks, as they can sometimes be a little dry when eaten cold, fruit and yoghurt portions with some crushed biscuits that I've made and thought would be a good topper!

The muffin is both the carb and part of the portion of Veg/fruit. The cucumber and the fruit is the other part of the two portions of fruit/Veg that I like to have in each lunch box. The yoghurt is the dairy and the protein.


Again, the same as last week as I have made the Chicken Tikka Wraps and put them in the freezer, ready for putting straight into a lunch box. I added a little spring onion and chopped celery to the Chicken along with some Mayo and have a healthy portion in the mini wraps. I will send the children to school with a little pot of salad leaves and some other veggies (Carrot, cucumber) to add to the wrap before eating.

The Wrap is a carb, the Chicken is the protein and the Salad is one portion of their fruit and veg. I will also send both children to School with a portion carrot and cucumber sticks and a small bottle of milk and a milkshake straw to use if they wish.


Same as last week, as these are rolled ready in the freezer!

I'll also send the children to School with a pack of Popcorn, some hummus and carrot sticks and a small portion of a mousse type pudding that I've made along with a bottle of Fruit Juice.

Thursday/Friday - To Be Decided!


I suppose really I should do a football-themed lunch for England is playing Belgium this evening, but well I don't want to really! I'll have a good think, and come up with something before Thursday so that I can buy any extra's that I need.
Family Life Food Meal Plan Packed Lunch