- June 18, 2018
I did think that the Packed lunches were going to kill me, but the weekend before we started having lunches again, I made up a months worth of Sandwich Sushi and Wraps, so that I can easily pull them out of the freezer of a morning and have lunch ready in just a few seconds. 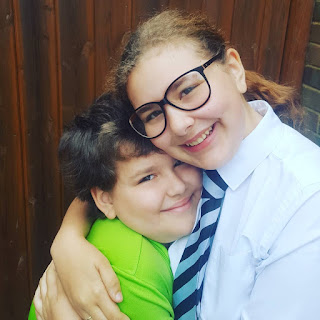 The other benefit of this, is that I only have to think of two lunches a week and this week one of those lunches makes a batch, so we'll be good next week for lunches on three days, leaving me to just think up one new lunch and then I'll come up with even more ideas for July.

Same as last week, as these are rolled ready in the freezer!

I'll also send the children to School with a pack of Popcorn, some hummus and carrot sticks and a small portion of rice pudding along with a bottle of Fruit Juice.


When I first discovered these back in 2013, I thought they sounded fun, but I didn't realise how GREAT they would be. Honestly, these are one of the most requested items I've ever taken to any Munch and Mingle, Picnic, or Snack swap!

I'll serve these with flavoured water and Cucumber sticks, as they can sometimes be a little dry when eaten cold, fruit and yoghurt portions with a little Granola for texture and just because my two love to steal my Granola!

The muffin is both the carb and part of the portion of Veg/fruit. The cucumber and the fruit is the other part of the two portions of fruit/Veg that I like to have in each lunch box. The yoghurt is the dairy and the protein, especially with my pilfered Granola!


Again, the same as last week as I have made the Chicken Tikka Wraps and put them in the freezer, ready for putting straight into a lunch box. I added a little spring onion and chopped celery to the Chicken along with some Mayo and have a healthy portion in the mini wraps. I will send the children to school with a little pot of salad leaves and some other veggies (Carrot, cucumber) to add to the wrap before eating.

I'll add a few extra "bits" to Top Ender's as she's off on a School Trip today with the year above her at School and starting off early and returning late.

The Wrap is a carb, the Chicken is the protein and the Salad is one portion of their fruit and veg. I will also send both children to School with a portion carrot and cucumber sticks and a small bottle of milkshake for Dairy and as a treat.


Thursday is the Summer Solstice, so I thought I'd make a special lunch for Dan Jon and Top Ender to enjoy. I decided that what we needed to do was make a sunshine in a box lunch. This means that everything in the box will be yellow! So stop by on Thursday to see what I made!


And that's what we're having this week, I'm excited, are you!?
Food Meal Plan Packed Lunch