A Visit to Kensal Green Cemetery

- June 27, 2018
For some time I have been planning a trip to Kensal Green Cemetery in North West London, for the family, admittedly not a "normal" family outing, but have you met my family? When running an hour early for a meeting last week and found myself practically on the doorstep of Kensal Green Cemetery, I managed to take some time to take a look. A pre-visit if you will!

This cemetery is the largest, in terms of size if not in numbers of burials, of London's 19th Century "Magnificent 7" cemeteries. It was also the first, opening from 1833 to alleviate overcrowding in existing parish burial grounds. Over 250,000 people are buried here in this 72-acre site, and it is still open for some burials and interments today. 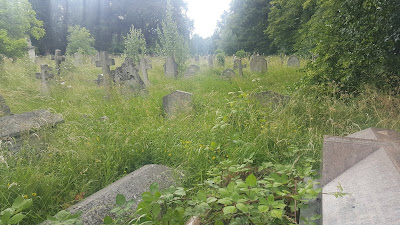 Now, the thought of being fascinated by the opportunity to visit a cemetery may be rather unusual to some readers, but this is a very special site for a number of reasons.

Firstly, it is the last resting place of many notable people - people who have had a lasting impact on society and without whom we would live in a very different world. In my one hour visit I was able to locate the graves of both Charles Babbage - English mathematician considered by some to be "father of the computer" - and of Isambard Kingdom Brunel - one of the greatest figures of the Industrial Revolution. It was moving to be able to pay my respects to people we should have a great deal of respect for.


Secondly, the site is filled with amazing architecture and nature. The buildings, including the Anglican Chapel with the underground catacombs, are of a Grecian style, with imposing stone columns, however many of the gravestones, monuments and the private mausoleums are of a Gothic style. Many are Grade I, II and II* listed.

Apparently, over 15,000 trees were originally planted at the site, and it is known to be home to 33 species of birds, and other wildlife, so it is quite the nature reserve despite that not being the principal reason for the place.


Thirdly, despite its location just minutes from Central London, the site is peaceful and quiet. There is very little traffic noise save for some passing airplanes. The site is bordered by the Paddington Arm of the Grand Union Canal to the south, which helps to keep road noise away. The tree and shubbery planting has clearly developed over the last 184 years to give the impression of a site situated in woodland. I was able to walk around for an hour and only met half a dozen other people. There was a brief sense of community with each person I met, as we took time to explain why we were here, whose memorial we were looking for, and share hints from our maps for where we were and where to head next.

Finally, the site is educationally stimulating - for each untended or abandoned grave or memorial, there is surely a story to be discovered. Thanks to the way we collate and share information online these days, I was able to pick some memorials, look the names up on my phone, and find out more about them before I'd even left the cemetery. For example, finding the tomb of John Cam Hobhouse, Baron Broughton de Gyfford, and learning he had fought to reduce the number of hours Children were permitted to work in the Mills DOWN to 64-hours a week - something my children found hard to contemplate!


Also, having spent many hours taking part in Orienteering exercises to support Top Ender's Duke of Edinburgh award, locating the graves and memorials to these historic figures was a similar exercise - many of the plots are listed at Find A Grave but you have to arm yourself with a map, and head off into the wild grass, looking for the small pathways that separate the numbered sections, until you find what you are looking for - and it can take a fair amount of hunting. You will find the map below invaluable.

I suspect I will be back, but this time with the family. It's not a site for running about, but with reverent hunting it can be quite a moment to seek for and discover the last resting place of a famous name, celebrity or member of the nobility - and combined with opportunities to learn about that person, their life and what they did for society, whilst enjoying the serenity and peacefulness of the sprawling woodlands, makes it a must visit.

There is ample free car parking on site - head for the Alma Place entrance off Harrow Road, opposite Hazel Road. Go straight on through the gates, and follow signs for the Crematorium. Note that the Crematorium is still in operation, so be wary of other road users and pedestrians. Provided you aren't blocking access, you are also permitted to park on the sides of any of the roadways. When I visited, the wet and hot Spring weather had made long grasses a challenge so the site seems rather overgrown and unkempt in places. I would recommend long trousers and socks, as the long grass - and what lives within - may cause a nuisance!

Should you choose to visit on a Sunday, The Friends Of Kensal Green Cemetery provide tours in the summer months - they start at 2pm from the Anglican Chapel for £7 per person, with no need to pre-book.

If you visit, why not let us know in the comments - or share your recommendations for other similarly unusual places worth a look and we'll check them out on one of our next family days out!
Family Life Free Days Out