- June 02, 2018
So the meal plan this week has the children back on Packed lunches, with the exception of Top Ender having a Curry on a Tuesday and Dan Jon having Fish and Chips on a Friday.

I can't say I'm unhappy about this, I love making packed lunches for the children! 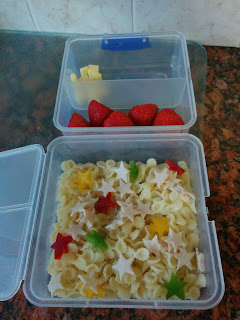 Our family day out for June is today, so we'll be eating at some point I'm sure. Dan Jon and I are actually in charge of this trip, so we'll have to think of something to eat. I'm thinking that we'll pick something simple and quick to prepare before we all disappear to our rooms to collapse after the hours of walking Dan Jon and I have planned.

We are thinking taco's but we're not sure just yet!


We really enjoyed the roast we had last week, so we're having another this Sunday.


The pasta we had last week was a total success with everyone very happy with the meal and asking for seconds. I was mean however and said no... and not JUST because I wanted the small bowl of leftovers for myself.

We're having it again tonight sans bacon, hopefully, everyone will still love it.


Who doesn't love homemade fish cakes and beans? Me. I hate making fish cakes because they always fall apart and I hate beans. If you want to pop round and cook for me this evening, I'd love it.


The children and I will have a Veggie Pizza with Salad between us for our meal tonight. Flyfour is going to be home late, so well make him suffer by having to eat something from the freezer. I have a feeling that he'll pick chicken goujons as they are quick and easy to make, but he might surprise me and make his own pizza.


I found this recipe on Good Food and decided that we had to have it, even if the children did turn their noses up at the idea of spinach. Apparently that "Green stuff" I serve with pasta (and eggs and in about a dozen other things) isn't spinach but green stuff and therefore acceptable to eat!


We're having a carb free meal today, Pesto Chicken with Salad. Okay I lie, there will be a whole 2g of carbs but we will all love it and the Diabetic team won't mind that there was 2g because that is tiny!


So that's what we are eating this week, how about you?