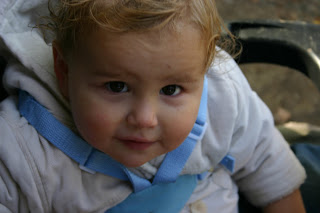 As predicted Baby Boy suddenly became a lot worse with a sudden rush of other symptoms appearing over an hour where we felt he needed the antivirals. I called our GP just to check that it would be okay, as he had been slightly ill for a couple of days and they agreed he needed them.

As Daddy and I could not go to get them we called upon Grandad and Nanna and asked if they could possibly go and get them for us. They agreed (Thank you!) and were soon round to collect Baby Boys ID and the other information required.

When they got to the Chemist they dutifully handed over the slip of paper I had given them which listed Baby Boys details along with his and their own ID. The Chemist turned out to be the same one that had issued both mine and Daddy's antivirals as she exclaimed;