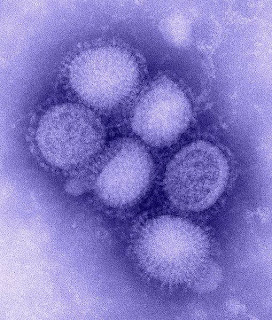 That's right all of us.

At the same time.

Well, actually Top Ender was hit first and then me and then Daddy. Somewhere in the middle of it Baby Boy got a very mild version and generally hasn't been effected as much as the rest of us. For which I am incredibly thankful but, before I count my chickens, he has slept longer today so we might be in for a rough time still.

We were at my Nans when Top Ender got ill, and at first we didn't want to attribute her illness to swine flu, mostly because my Nan fits the at risk categories and I didn't want to be the one bringing it in to her home! We knew that it was a possibility however as two of Top Enders friends from her school year had been diagnosed with it the week before Half Term and a further friends brother was hospitalised from complications (but as far as we know he is okay now).

When we took Top Ender's Temperature and it was 104°F (40°C) we decided that we probably were dealing with Swine flu and so Daddy called the helpline. After answering the questions they gave Daddy a reference number and together they worked out where the nearest chemist to us was. Seeing as my Nan lives in quite a rural area, we were surprised that there was one quite close.

Daddy jumped in our car and set off, it was only when he was in the Chemist that he ran into problems.

Turns out that if you call the helpline they neglect to tell you this little detail. Daddy of course realised a second problem, we are actually on holiday and so we couldn't even pop back home for any ID for Top Ender without a 3 hour drive first.

The Pharmacist was luckily understanding to our plight and whilst attempting to call to check what to do in an case such as this decided that our need was greater than protocol and sent Daddy on his way with the medication and advice on how to help make Top Ender better.

When we left my Nan's on the Monday (when Top Ender was over the worst of the fever), I realised that I was feeling tired. I put it down to having had a stressful weekend and with the motion of the car I was soon asleep. About an hour after we got home that I asked if we could turn the heating on as I was freezing. Something made Daddy take my temperature and he saw that it was 102°F (39°C). 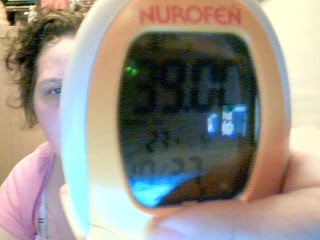 It was only then that I realised that I had a sore throat, a pounding headache, a runny nose, a horrid cough, aching muscles, I wasn't hungry (there's a first!), and I actually felt a little sick... two hours later and Daddy got the chills too, although his temperature was 101°F (38°C).

Right now I am feeling semi okay. I am still running a fever but have enough strength to watch the children and play games on the floor (well I sit on the floor holding various items passed to me!) and I have even managed to put a load of washing on!

Top Ender and Baby Boy are on the way to recovery and had omelette's for tea tonight (Yes I did gag whilst making it). Top Ender doesn't seem to understand how she is feeling better, but still can't do anything without suddenly needing a short nap afterwards! Baby Boy is just wandering around all snotty asking;

Daddy is currently sleeping which I am hoping means come tonight he will take care of Baby Boy and Top Ender, but I am not holding out any hope!

So please pass on to all you know that you need to take a form of identification for the person picking up the medication AND the patient who the medication is prescribed for!
Illness