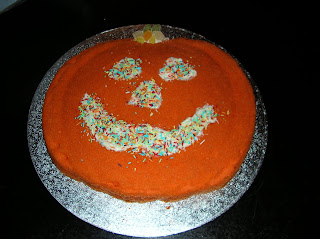 The other day, my Mum had an accident and ended up having to go to hospital for stitches in her face. My Sister took her and described the gory details to me on the telephone the next day. That night as Top Ender and I were walking down to her Swimming lesson I was regaling her with the story.

"And the hole is so big, they can't put stitches in!" I said
"And is it still bleeding?" asked Top Ender
"Well, no they stopped the bleeding" I said
"Can you see the hole now?" she asked
"Yes... well I imagine they have put a special plaster bandage type thing on it now" I said

There was a pause as Top Ender processed what I had told her.

"Is that what she is going to wear for Halloween?" asked Top Ender
"What?" I asked thinking I had missed something
"Is she going to wear it for Halloween?!" repeated Top Ender impatiently
"Well it won't be healed by then, so I guess she will have it on" I said
"Cool costume then" stated Top Ender "Do you think she did it on purpose?!"
"I think that would be a bit extreme Top Ender" I answered, suddenly wondering if maybe she did do it to get the best costume award at our party
Funny