- October 23, 2009
Once upon a time in a kingdom far away there lived a brave princess called Top Ender, who enjoyed playing on Arcade Games, such as The Fast and the Furious Super Bikes Racing Arcade Game. As a treat The King and Queen had taken the brave princess to the Kingdom of Brighton pier, where such a game existed. 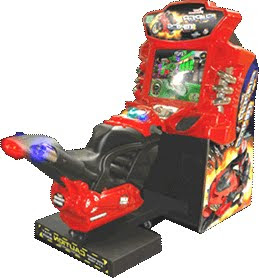 Also in the kingdom, was Baron Teenager Boy. Baron Teenager Boy and his court also enjoyed playing The Fast and the Furious Super Bikes Racing Arcade Game and would often be found of an evening practising their skills, in order to impress the local Teenager Maidens.


And so it came to pass that both Princess Top Ender and Baron Teenager Boy were both going to race in the same race, as they has placed their coins into the machine at the same time. King Daddy stood next to Princess Top Ender, (Queen Mummy and Prince Baby Boy were posing for the court artist) as she navigated the course and Baron Teenager Boy's court stood with him.


As the race finished the court of Baron Teenager Boy congratulated the Baron on his triumphant 4th place victory. King Daddy looked at Princess Top Ender before clearing his throat loud enough for the Baron and his court to hear.


The Baron and the Court looked over to where Princess Top Ender was still sat on her motorbike and in front of the screen that showed a large "3rd".

Princess Top Ender however took it all in her stride. After all, she was the best motorbike riding Princess around!