Grease The Stageshow - A Review

- May 30, 2011
We received two tickets to go and see the show and Top Ender drank two glasses of orange juice... the hussy.

One of Top Ender's favourite musicals of all time is Grease, (ever since we took her to see the film at an Open Air Film Festival), it has become a staple of her film collection. When we were asked if we would like tickets to go and see the stage show at Milton Keynes Theatre the only trouble was deciding if Daddy or I would go with her to see it. In the end Daddy valiantly stepped to one side allowing me to get out of the front door with Top Ender... although I think he was just worried that I would ban him from listening to the soundtrack in the car as I did with Chess after I was unable to attend.

Stealing a line from Greased Lightening, the atmosphere was "electrifying" with a large neon light Grease logo hanging down in the centre of the stage. 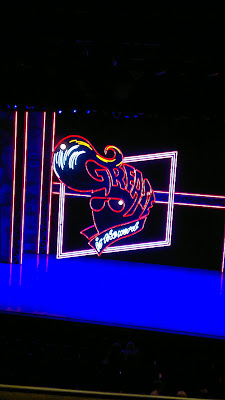 As soon as the opening few bars of a medley of Grease songs were played people were clapping along, singing and in Top Ender's case having a dance. The show was fantastically performed and for someone like Top Ender who has only ever seen the film version of the musical, it was different as things come in a different order and different emphasises are made on some songs. Luckily though she has had her Daddy and I to teach her all the songs that were being performed as main pieces that you only hear in the background of the film. The cast were great and each had a good handle on their part, and I was glad to see a lot more comedic moments in the background whilst the main characters were doing their stuff. 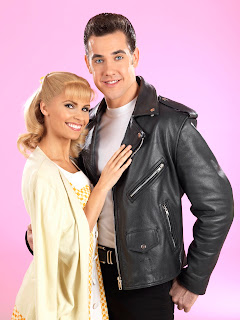 If you are planning on taking your children, please do remember that some of the songs and dialogue are rather grown up in tone. At the moment we are lucky that Top Ender is young enough that most of these phrases go straight over the top of her head (I was well in to my teens before I realised what half the film was about!) and those that she has picked up we have managed to convince her she has misheard ("No, Top Ender!" he said "The Chick's will Scream, not cream" or "Pussy Wagon? No, pretty wagon, it's just his American Accent making it sound odd...") or just plain misunderstood.

The show is in Milton Keynes until the 4th June and moving on to Bradford, Southampton and Oxford and in several other towns as it's run is right up until the end of the year.

PS Top Ender helped me write this blog post, she wanted me to tell you all.
Review