- May 14, 2011
I love this weeks theme for The Gallery, mainly because I have some fantastic photographs that I get to share with you as well as a story I want to share and also who doesn't love a good Moustache?

First things first a story about a moustache.

I can't quite remember the details (okay so I can but I'm not going to share them all with you) but Daddy (who was just fiancé back then) was over at my parents house with me when he got a message from his mustachioed Dad asking him to check his email. Daddy checked his email and saw that his Dad had sent him a picture. Daddy and I crowded round the PC and watched as the picture jerked down the screen in stripy chunks as it did in the late 90's.

The first thing we saw was a strip of blue sky with a bit of a TV Ariel. We could tell that the picture had been taken in the back garden.

Then we saw the top of a head. We recognised the hair as belonging to the man who was to become my FIL.

Then we saw his forehead and then his eyes, followed as you would expect by his nose.

We knew what was coming. We knew that the next strip was going to show us that the mustachioed man was no longer mustachioed. We crossed our fingers and held our breath, hoping that the modem wouldn't lose it's connection, that the download wouldn't hang... and then there he was. My soon (ish) to be FIL looking naked without a moustache grinning at us from the computer monitor. It has been so long since he had a moustache that I don't remember what he looks like with one any more, but I will always remember the first time I saw him without one!


So on to the photos.

When we went to the Vosene Event at London Zoo, Baby Boy had a photograph taken of him sporting some fine facial hair. I don't know about you, but I think it kind of suits him! I think he looks like he should be in a detective show. Dougie Howser PI anyone? I think it would be a great show... 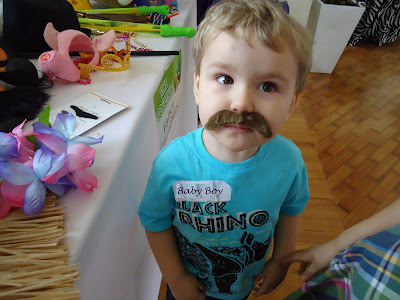 I do love a man with a moustache... as long as he isn't my husband because he really doesn't suit a moustache. Or a Beard. In fact you remember when I won MasterChef? That wasn't the best part of the day. The best part of the day was when I met the lovely Dick Strawbridge who has the best moustache in showbiz. My only regret is that I didn't get a photo with him that day. I did get a bit of video though. Want to see it?


(Video can be seen at http://youtu.be/zUXJeH5C5FQ)

Seriously though, I don't know where Baby Boy gets the whole dressing up with a moustache thing. No Sirree, I do not know at all... 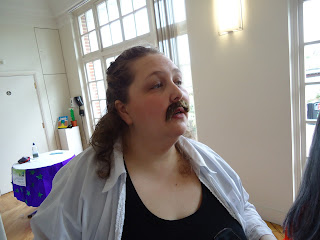 Don't forget to head over to see all the other Moustache pictures on Wednesday by following the linky at Sticky Fingers!
Meme