- May 28, 2011
On the day of Top Enders First Concert, Top Ender and I were discussing what she was going to wear. We already knew that she was wearing her school uniform, but she could go with trousers or a pinafore dress, or a summer dress, or a skirt or... you know anything that was school uniform. We then got on to the tricky subject of how she was going to wear her hair.

Whilst we were talking, I was moving around the kitchen doing other chores; Getting Top Ender a drink, putting Big Boy's cup's for bed to one side, getting Top Ender an after dinner snack, trying to stop Daddy from eating food in the fridge before he had his dinner and just generally not letting my kitchen look like it did in that tour of my kitchen video (I did a follow up video if anyone wants to see of my clean kitchen, just to prove I am not really a slob all the time).

I reached into the biscuit tin and pulled out a chocolate biscuit for Top Ender, I looked at her and said

to which she replied

"I already told you I'm not going to wear any ribbons and if I did they would have to be GREEN!"

Daddy and I spent the next five minutes giggling and trying to explain to Top Ender that was the name of the biscuit she was being offered. 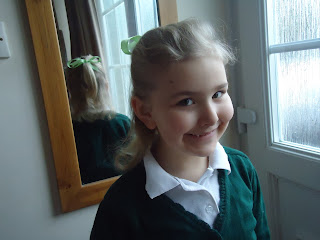