- May 06, 2011
I am confident in my cooking skills, I know my way around and if needs be I can turn out something rather special. I have a Sunday Roast down to a fine art thanks to the Halogen Oven, my lasagne is legendary and whilst we might disagree on toppings or where they should finish even fish finger pizza tastes good if I have cooked it... so why was the news that my MIL was going to join us for an evening meal sending me into a tailspin? Like Daddy my MIL is celiac, but with the added restriction of a dairy intolerance too, and she had had a Roast Dinner with us just a few weeks before so I needed something new and special. I decided to go with Stuffed Chicken Breasts wrapped in Bacon. These are a favourite of Top Ender's and I normally make them with a cheese stuffing but with the dairy intolerance I decided to go with a red pesto filing instead.

Taking a chicken breast and slitting it to create a pocket for the sauce to sit in was strangely relaxing. I added one desert spoon of pesto to each breast and wrapped in bacon. I quickly seared the breasts to give them a bit of colour and then put them in to a glass dish in the oven on gas mark six for about thirty minutes as they were covered. To go with the Chicken Breasts I decided to roast some baby new potatoes with cherry tomatoes, and steam some green beans. The roast potatoes and cherry tomatoes smelt divine as I took them from the oven (same heat and time for the potatoes as the chicken, but I threw the cherry tomatoes in for the last fifteen minutes or so) and even Daddy came into the kitchen to see what the smell was and he doesn't like tomatoes normally! 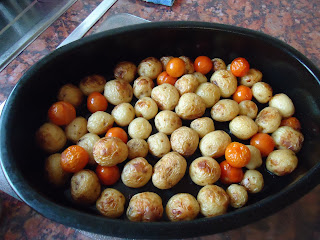 The pièce de résistance though was the chicken, which looked and tasted FAB and I think that it looked like a great meal when put on the plate too! 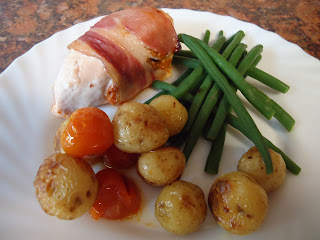 I was inspired by EnglishMum, to add an Easter Egg (you know like a secret hidden area) to this dish which I shared on Twitter at the time but I can't share here just in case my MIL is reading... if you want to know the story let me know over on Twitter!
Main Meal Recipe