- May 07, 2011
My Mum loves Salmon, and so it's thanks to her that I do too. I remember the confusion of a publican/restaurateur when my Mum asked for her Salmon to be prepared sans sauce as she enjoyed the natural flavour and I don't think that other than in a fish pie I have ever had Salmon in a sauce... although I am not opposed to the idea! I am pretty sure that the first time Daddy had salmon was with me and I baked it in tinfoil on the BBQ with just a knob of butter, a splash of Lemon Juice and a sprinkling Tarragon.

These days we have Salmon fairly infrequently because the Salmon is not as inexpensive as it was when I was growing up and when we do there is normally a fight between Daddy and I over who is going to prepare it. The last time we had it I won the fight and decided that I would season it with my mixture of Herbs that I normally use on Italian food; It's a mix of Oregano, Basil, Marjoram, Thyme, Rosemary, Sage, Parsley and flaked Red Pepper. 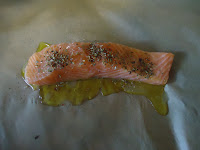 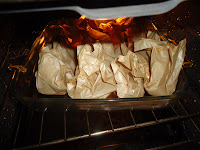 As you can see I placed the salmon fillet on some greaseproof paper, drizzled olive oil over the salmon before giving a sprinkle of herbs. I then added all the parcels to a glass dish and put them in the oven for twenty to thirty minutes at gas mark four. The best way to tell is when the salmon is ready I find is when it is starting to flake but still looks pink! 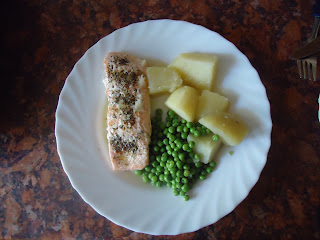 I had decided to serve the Salmon with boiled potatoes and some peas and it was so delicious that everyone ate it all up!
Main Meal Recipe