- May 07, 2012
There seems to be one common film that all women love or have at least watched once and that is Dirty Dancing. It seemed that as I was growing up, if you didn't have a crush on Patrick Swayze before watching the film then as soon as you watched it you did! Of course everyone knows lines from the film and has had their own personal "I carried a Watermelon" moment and has wished for their own Johnny coming and saying "Nobody puts Baby in the corner"... sorry I just had a moment there.

I was offered two tickets to the stage version when it came to Milton Keynes Theatre and so my Mum and I thought we would have a girls night to celebrate our birthdays. When we arrived at the theatre we were unsurprised to see that most of the audience were made up of women, this was definitely a girls night out and the excitement levels were really high. My Mum and I were quite giggly when we saw that one of the cast had sent me a tweet letting us know he hoped we enjoyed the show and we did spend a good ten minutes trying to work out which one he was on stage. Well, it might have been that we were trying to work out who he was or we might have just been ogling the rather attractive male cast members!

As it started I was thinking that I wasn't sure how this was going to work, everyone there was a fan of the film and the show was going to have to be pretty spectacular to win them over. Within a few minutes though everyone was totally engrossed in the show, I don't think I have ever heard an audience being so quiet (apart from when joining in, wolf whistling, and generally screaming). The first half of the show seemed longer than the second, but it still moved along at a good pace. There were a couple of scenes that I didn't remember from the film and a couple missing but it didn't really matter the show was still really great. Talking with a friend who had gone to the same performance she thought that the first half of the show was a little slow, but she admitted that the only thing she was looking forward to was the dance at the end where Baby finally does the dance routine perfectly with Johnny! 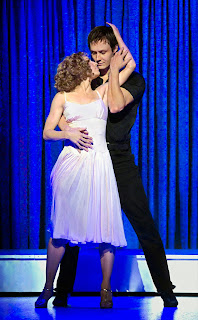 The audience (and me and my Mum) loved the show and we were all swept up with the excitement of the cast. As we walked out at the end my Mum turned to me and said "let's go again tomorrow!" and I was ready to sign us up for Dance lessons too. It was the talk of the playground the next morning (with the husband of my friend who had also gone and then with playground Mums in the afternoon) and my Mum and I couldn't stop talking about it when we called each other in the evening.

If you get a chance to go to the show, then do go as it is a great night out and a great excuse to paint the town pink!

We were given two tickets thanks to Milton Keynes Theatre.
Review