An Missed Evening Out For The Olympics

It's okay though there will be Chinese instead.


This afternoon Daddy and I were going to be heading off to London to the Royal Albert Hall for a Pre-Olympics Event "Our Greatest Team Rises" that sounded absolutely fantastic. We are all really looking forward to the Olympics her at A Mothers Ramblings and we thought having a chance to meet Sir Steve Redgrave, catching up with friends and watching some great performances would be a great way to celebrate the Olympics nearly being here.

As is to be expected at the moment with us (everything is going wrong at the minute!) there was a nearly last minute hitch and it meant that Daddy and I had to turn down our tickets.

Anyway we are still really excited about The Olympics and I'm quite looking forward to collecting the Medallions that have been created (with BP, The British Olympic Association and The British Paralympic Association) representing the winning moments of 12 British Olympic and Paralympic legends. The medallions are available to buy from BP forecourts nationwide and I'm guessing that they are smaller than the one Steve Redgrave is pictured next to! 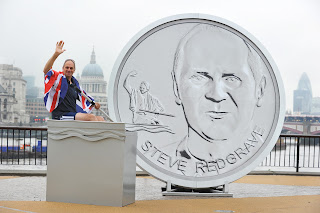 So tonight instead of listening to Gary Barlow and Alfie Boe, I'll be having a Chinese, watching some TV and writing some bits for Pippa World. Way better than hobnobbing with Royalty eh?
Family Life