- May 08, 2012
Everyone seemed really shocked this year when I said I was making my own birthday cake. I'm not sure why as I'm pretty certain for the last ten years I have been responsible for making them for me, for Daddy, for the Children and anyone else who has wanted them too! This year I did have an ulterior motive for wanting to bake my own though as Stork had sent me the new Easy to Mix Baking Liquid to try and I thought that my birthday cake would be a great place to start.

I'm terrible when it comes to baking cakes as I tend to cheat and instead of creaming together the butter and the sugar first I just add everything into one bowl and whisk until smooth. It works for me and I have to say that I think that my cakes taste pretty fantastic, even when they are made with gluten free flour! With the Stork Baking Liquid being ready to just mix in it is perfect for creating a smooth batter within seconds, which meant as I hadn't started making my cake until ten minutes before the school run I didn't waste any time.

I was planning on making a large pink birthday cake, but as there was so much batter I thought it might be better to make a few cupcakes as well as the main birthday cake. Gluten Free flour, in my experience, needs a lot of liquid and I think that having the Stork liquid really helped as I didn't have to add extra to help keep the batter moist. All the cakes were beautiful tasting, Big Boy is always appreciative of my efforts and was trying to eat as many of them as possible at the restaurant, but we managed to save a couple to drop off at my Mother In Laws for her and her friend (Boyfriend?!) to have after their meal out too. 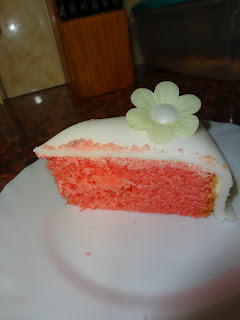 It isn't just me who thinks that the Stork East to Mix Baking Liquid is good though. As is traditional on a Sunday evening, Daddy went to make Scones. Daddy reappeared a few moments after going to make the Scones because he couldn't find a Stork Tub in the fridge (he made a lot of flapjacks in the day and had used it all up) and wanted to know if I had hidden it. I suggested that instead of using the tub of Stork he should using the Baking Liquid as it was the same stuff and so he went off to investigate my claims. Daddy returned about twenty minutes later very excited about the Liquid Stork which took a lot of the mixing effort out of making his scones.

We love Stork and normally keep a tub or two in the fridge for baking and I think that the new Stork Easy to Mix Baking Liquid will also become something that we keep in the fridge, especially as Daddy really loves it too. The liquid is £1.59 and available to buy now and there are some recipes at the Bake With Stork website, but over the next few weeks we'll be posting our own.

I was sent the Stork Easy to Mix Baking Liquid to try out.
Food