- May 31, 2012
Last week we were supposed to watch The Smurfs as our Thursday Pyjama Night film, but we ended up watching Zookeeper. This Thursday we watched Journey 2 The Mysterious Island, which was kindly sent to us by Warner Brothers. They were very lovely and instead of sending us the ordinary Blu-ray disc they sent us the 3D disc so we could watch it in 3D! Honestly, I don't think I can explain how fab they are for having done that or how pleased Daddy was as he loves having a reason to break out the 3D Glasses! 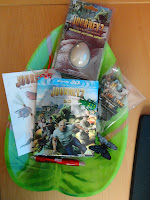 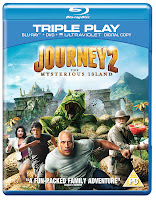 There were a few other bits sent with the DVD, some bugs, a Lizzard to hatch, some stickers, a jigsaw and a pen all served on a leaf tray! How fab is that?! So the film is the sequel to Journey to The Centre of the Earth which is one of Top Ender's favourite films. It is about Sean Anderson who receives a distress signal from his Grandfather from co-ordinates that are in the middle of the ocean. With his stepfather he sets off, manages to hire a Helicopter pilot (and his daughter) to take him and there they discover that there is an island there after all! 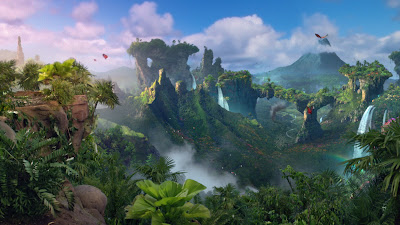 Things are different on the island than they are in the rest of the world For example Elephants are tiny and tiny bugs like bees are huge and so to tie in with this, pudding this evening was a giant cookie! It is the size of my head, which I think we can all agree cookies aren't normally that size! 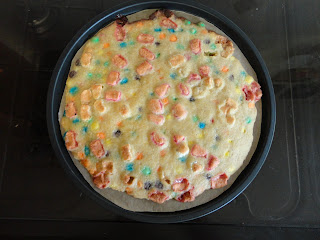 Tonight's Family Pyjama night has been a great success and we can't wait until next week now.